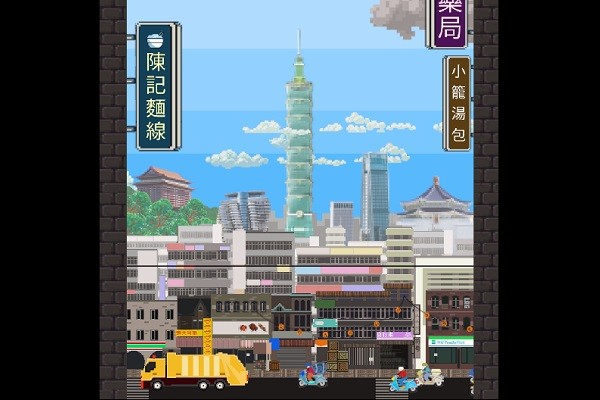 TAIPEI (Taiwan News) — An artist who specializes in non-fungible tokens (NFTs) created this animated 24-second loop of a fantasy cityscape of Taipei.

The pixel art piece was created by Lucas Renzo Giovannetti, 26, who lives in Toronto, Canada. In the fanciful scene, one can see Taipei 101, Grand Hotel Taipei, Chiang Kai-shek Memorial Hall, Agora Garden, Taipei Nanshan Plaza, a Tigerair jet, an EVA Air jet, umbrellas, scooters, taxis, a Danhai light rail train, a 7-Eleven, a FamilyMart, and a trash truck as a full day rushes by in 24 seconds.

The video also features a feast of sounds, such as a traffic cop whistling, scooters roaring, jets soaring, people chattering, rain pelting, neon buzzing, and a garbage truck wailing. Prominently placed on the top is a sign for Chen Ji Mee Sua (陳記麵線) wheat vermicelli on the left and Xiaolongtangbao (小籠湯包) steamed buns on the right, along with the lower half of a pharmacy sign.

Some netizens noticed a minor translation issue with an Italian noodle shop sign printing the Simplified Chinese term 意大利面, instead of the Traditional Chinese usage 義大利麵. Others argued over whether the Chinese word for bicycle 自行車, commonly used in China, would be seen in Taiwan, as opposed to 腳踏車, with the case made for both.

Giovannetti told Taiwan News that he specializes in making 1/1 art pieces depicting various cities in a 24-second loop that represents a 24-hour day. He said that he has always been fascinated by the aesthetics and happenings of the unique Taipei streetscape.

The artist said he loves the landmarks and "all of the quirky features like scooter traffic and tune-humming garbage trucks." He enjoys the blend of ancient and post-modern architecture and said that "I really just had to satisfy my urge to bring Taipei to life in pixel art form."

The piece can be purchased in his NFT collection called MILLECITTA until Dec. 25.