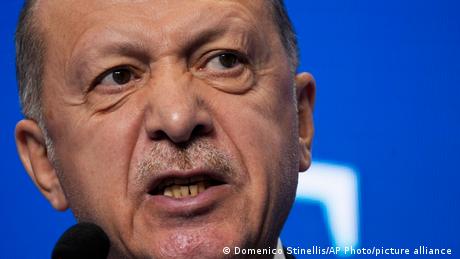 Turkey's lira dropped further on Monday before recovering slightly following a speech by Turkish President Recep Tayyip Erdogan on state television that cited Islam as a reason for not raising interest rates despite a rapidly depreciating currency and rampant inflation.

Erdogan has repeatedly called on the central bank to lower borrowing costs despite an annual inflation rate of more than 20%. Mainstream economists believe the outcome of Erdogan's Islamic-infused experiments with the currency could result in consumer inflation reaching 30% or higher in the months ahead.

However, in his remarks on state television, Erdogan insisted it was Islam that guided his decision in demanding the central bank keep interest rates low. He also promised aid to exporters and increased government contributions to pension funds.

"As a Muslim, I will continue doing what our religion tells us. This is the command," Erdogan said.

How much trouble is the lira in?

At one point in Monday's trading, the lira dropped more than 11% against the dollar to around 18.40, an all-time low, before recovering some of those losses later in day. Many Turks are struggling to afford basic goods and services.

After Erdogan spoke and provided incentives to encourage lira denominated savings, the lira strengthened about 10% and traded around 14.90 against the dollar. However, any gains the lira made come as the dollar faces pressure.

Since the beginning of November, the lira has dropped 45%. Trading was suspended briefly Monday on the country's main stock exchange in Istanbul for the second successive trading session as trouble with the lira spilled out across the economy.

Foreign diplomats in Turkey speculate that Erdogan thinks economic growth will enable him to claim victory in the next election set to take place by mid-2023, enabling his tenure at the helm of the Turkish republic extend into a third decade.

Erdogan believes a cheaper currency will fuel exports but at a time of rising inflation, mainstream economists counsel raising interest rates to offset inflationary pressures on the economy. He again promised to rein in inflation and get it to under 4%, a recurring broken promise of his.

Islamic banking is predicated on the concept that charging interest on loans or borrowed money is usury. It is not the first time Erdogan has cited Islam as guiding his monetary policymaking decisions.

Last month, Erdogan declared an "economic war of independence." He said his goal was to eliminate Turkey's reliance on foreign direct investment and the varying cost of energy imports such as oil and natural gas necessary to fuel a booming economy.

Feuding with business leaders over economics

Business leaders who traditionally have come to Erdogan's aid say they have had enough. In a letter over the weekend, the powerful TUSIAD lobby of major exporters issued a statement condemning Erdogan's course for the country's monetary policy.

"The policy choices implemented here are not only creating new economic problems for businesses, but for all of our citizens," TUSIAD said.

TUSIAD added, "It is urgent that we assess the damage that has been done to the economy, and quickly return to the implementation of established economic principles, within the framework of a free market economy."

In response, Erdogan lashed out at the business lobby after chairing a Cabinet meeting where a new tax was agreed upon, among other measures to increase the value of the lira against the dollar and the euro.

"You are scheming to topple the government," Erdogan said. "Do not hold out your hopes in vain."