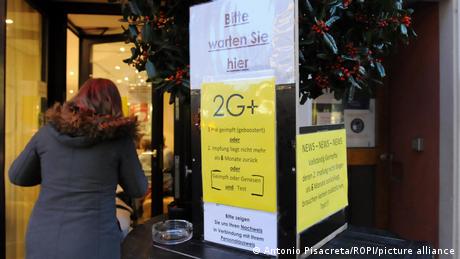 Germany is expected to introduce new COVID restrictions during a meeting between Chancellor Olaf Scholz and state leaders on Tuesday, according to a draft agreement seen by DW. If passed, the new curbs are expected to begin on December 28.

What types of measures will be announced?

The government is expected to limit inside and outside public gatherings to a maximum of 10 people, with the restrictions also applying to vaccinated and recovered people. Children aged 14 and younger would be exempt from the rules.

If an unvaccinated person takes part in the gathering, then stricter restrictions would apply, with people from one household limited to meeting with a maximum of just two people from another household under the proposed rules.

The German government and states are also expected to close down clubs.

The number of people allowed to attend indoor and outdoor sporting and cultural events would be limited to 30% to 50% capacity. States with high rates of infection would be obligated to cancel large events or hold them without spectators.

Under the draft announcement, companies and organizations negatively impacted by the restrictions will have access to financial aid.

Moreover, the German government continues to urge increased vaccinations, not only those for those who need a booster, but also for people who haven't received a jab at all so far.

"The vaccination campaign will continue throughout Christmas, the days between Christmas and New Year, and on New Year's Eve itself," the document said. Vaccination centers will remain open throughout this period, despite the holidays.

'2G' rule will remain in place

The draft document also says entry to public venues such as restaurants and cinemas will remain limited to those who are vaccinated or recovered, known in Germany as the "2G" rule.

German Health Minister Karl Lauterbach this weekend ruled out the idea of a lockdown for Germany prior to Christmas. At the same time, the top health official has warned the country will face a "massive wave" due to the omicron variant of the virus.

Germany has registered 16,086 new coronavirus cases and 119 deaths over the past 24 hours, according to the latest numbers available from the Robert Koch Institute (RKI) for infectious diseases. The total number of infections now stands at 6,809,622, with at least 108,352 deaths nationwide.