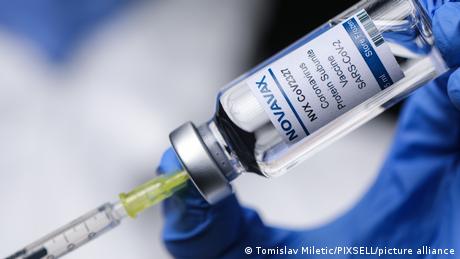 The European Medicines Agency (EMA) said its experts would hold an extraordinary meeting on Monday to decide on the Novavax vaccine.

The EU has already signed a deal to buy up to 200 million doses of vaccine, pending authorization for its use by the Amsterdam-based EMA.

Novavax said its vaccine showed 90.4% efficacy against COVID-19 in a trial in North America.

Ahead of the expected announcement, Novavax Chief Executive Stanley Erck said the firm "looks forward to providing an additional vaccine option in Europe, built on a proven, well-understood technology platform."

The vaccine "may help address major obstacles to global vaccination, including global distribution challenges and vaccine hesitancy," he added.

Why is Novavax different?

Novavax uses a similar technology as vaccines for hepatitis B and whooping cough, which do not have to be kept in ultra-low temperatures. This could give it a competitive edge logistically, particularly in regions with less-developed infrastructure.

It employs genetic engineering to grow harmless copies of the protein spike on the virus' coat. The spike is then purified and mixed with a chemical that boosts the immune system.

Newer technologies are used in the EU's existing vaccines. AstraZeneca and Johnson & Johnson use a common cold virus to deliver the genetic message that can provide immunity. BioNTech-Pfizer and Moderna use a hitherto largely untested Messenger RNA technology.

The World Health Organization last week gave emergency approval to the vaccine, which is produced by the US-based firm Novavax and the Serum Institute of India.

The vaccine — CovavaxTM — was the ninth vaccine to be granted approval by the body.

Novavax is currently is testing how the shots perform against the omicron variant. Like other manufacturers, it has started to formulate an updated jab geared to combat omicron specifically.