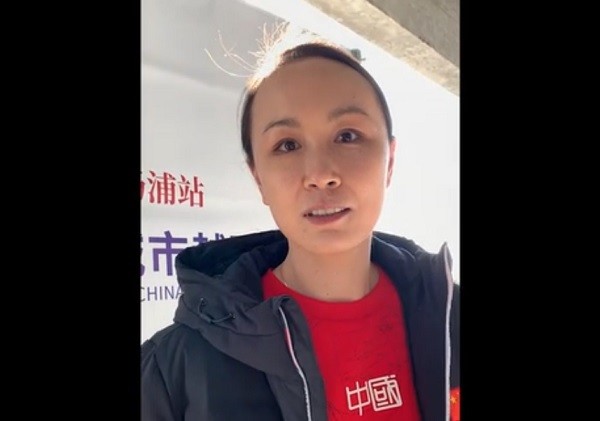 TAIPEI (Taiwan News) — During an allegedly "impromptu interview" released over the weekend, Chinese tennis star Peng Shuai (彭帥) became noticeably nervous when asked when she will next leave China and about her daily routine.

On Sunday (Dec. 19), Singapore state-controlled newspaper Lianhe Zaobao posted video of Peng attending the cross-country skiing event "FIS Cross-Country Skiing China City Tour" in Shanghai with Yao Ming. A reporter from the newspaper can be seen walking up to Peng for an "impromptu interview," though many observers have expressed skepticism over whether the interview was indeed spontaneous, as opposed to being staged by government officials.

After first appearing confused about the reporter's presence and his intentions, Peng agrees to the interview. The reporter starts by asking if she did indeed compose the email sent to the Women's Tennis Association (WTA) stating that the allegations about former Vice Premier Zhang Gaoli (張高麗) sexually assaulting her were "not true."

Peng responds that she had a few things she wanted to clarify: "First, I need to stress one point that is extremely important. I have never said or written that anyone has sexually assaulted me. I have to clearly stress this point." Seemingly acknowledging that she did author the bombshell post on her post on Weibo on Nov.2, she says it is a "private matter."

She goes on to say that "people have many misunderstandings" about her Weibo post. She claims that "none of the distorted interpretations exist."

As for her email to WTA CEO Steve Simon, she says that she wrote a Chinese version, but because her English ability is not good enough to make a proper translation, she did not compose an English draft. She says that the English version that was posted to Twitter by Chinese state-run media outlet CGTN was not authored by her but correct in its meaning.

Regarding her interview with the International Olympic Committee, she says she did not remember exactly when it took place. When asked if she was interviewed from her home, she confirms that this was the case.

When asked if she plans to travel outside of China, Peng's smile disappears, and she goes silent and looks off to the side.

Peng then starts to indicate she might when the pandemic situation becomes "safer," but before finishing that thought, she stresses she currently does not have any overseas tournaments scheduled. She starts to say, "I would not make any other extra..."

"If under normal" (circumstances)... If you wish that... such as... I do not know, such as to watch tournaments and such... normal." She then murmurs, "You cannot say I would go just to prove something."

"What would the purpose of going now?" She then laughs nervously and grimaces.

The reporter then asks what she currently does on a daily basis. Peng is noticeably uncomfortable with the question, looks off to her left again, and starts to walk away.

As she walks away, Peng says, "Uh, this I think... leave this to the next time I have time to share this with everyone."