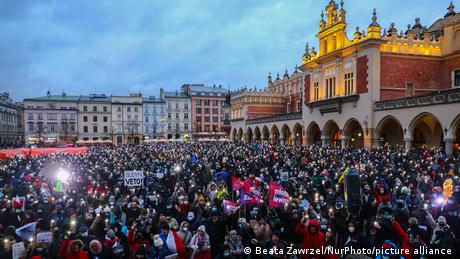 Thousands of protesters gathered in cities across Poland on Sunday demanding President Andrzej Duda veto a controversial new media law that critics charge is an attempt to force the sale of a critical television channel, US-owned TVN.

The US has registered its strenuous objections and Duda has in the past signaled through allies that he is prepared to veto the bill citing among other reasons, the concerns of the US regarding freedom of the press.

Senator Bogdan Klich, a member of the largest opposition party Civic Platform that has its roots in the Solidarity trade union instrumental in the country's peaceful transition from communism to market-based economics, pointed to larger issues of press freedom and democracy as well.

The deputy editor of the Gazeta Wyborcza newspaper, Jaroslaw Kurski, said the government sought to silence critical voices in order to steal the next election, scheduled for 2023.

"The mafia has taken over the country," he said.