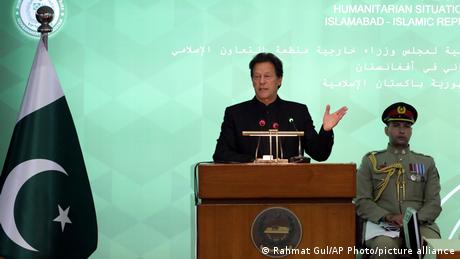 Delegates of the 57-nation Organization of Islamic Cooperation (OIC) met Sunday in a special session in the Pakistani capital of Islamabad to set up a humanitarian trust for Afghanistan as the country faces a harsh winter where millions could starve.

The conference was the largest international summit on Afghanistan since the Taliban deposed the US-backed Afghan government in August.

The OIC vowed "to unlock the financial and banking channels to resume liquidity and flow of financial and humanitarian assistance."

Pakistan's foreign minister Shah Mahmood Qureshi announced the development fund and said it would be set up under the auspices of the Islamic Development Bank, although it's unclear whether the effort will succeed.

What has host nation Pakistan said about Afghanistan?

Pakistani Prime Minister Imran Khan warned millions could starve and chaos could engulf the country if the situation is not addressed urgently.

"Unless action is taken immediately, Afghanistan is heading for chaos," Khan said.

Khan urged the US to "de-link" aid to the Afghan people from the Taliban government his nation helped install in Kabul. He suggested Western ideals of human rights may not match the reality on the ground and cautioned, "Every society's idea of human rights is different."

While concerns mount about the level of crisis facing Afghanistan, the international response has lagged. Western governments are reluctant to assist the Taliban out of fear of providing legitimacy.

How bleak is the situation in Afghanistan this winter?

In a statement, the meeting's participants said permitting Afghanistan access to frozen currency reserves abroad would be essential to preventing economic collapse. Representatives from the UN, US, the EU and Japan all observed the conference.

It was left unclear how much the humanitarian fund would hold. No recognition was granted to the Taliban during the conference.

More than 20 million Afghans face starvation since the Taliban overran the capital Kabul in mid-August. The near-total collapse of Afghanistan's banking system has complicated the already intricate matter of delivering humanitarian aid.

Afghanistan's banks have remained largely closed since August 15 when the Taliban seized control of Kabul and withdrawals have been limited to $200 (€178) per month.

Thousands stood in the cold on Sunday looking for an exodus from their war-torn nation as they awaited passports since the country began reissuing them.

The Taliban have kept women from employment and girls from education since seizing power again earlier this year. They have also targeted officials of the US and NATO-backed former government.