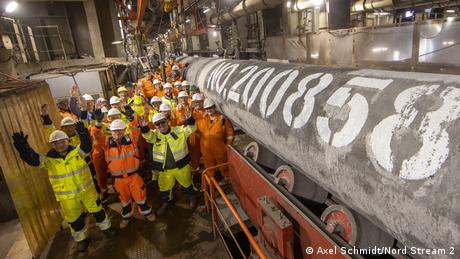 German Economic Affairs and Climate Action Minister Robert Habeck has warned Russia of "severe consequences" and threatened to halt the Nord Stream 2 gas pipeline, if Moscow were to attack Ukraine.

"Any new military action cannot remain without severe consequences," he told the Sunday edition of the Frankfurter Allgemeine Zeitung, referring to Russian troop deployment on the Ukrainian border.

Habeck warned that "nothing can be excluded," including blocking the pipeline from operation, if "there is a new violation of the territorial integrity" of Ukraine.

"In the event of further escalation this gas pipeline could not come into service," Foreign Minister Annalena Baerbock said earlier this week.

'The pipeline is a mistake'

Habeck added: "From a geopolitical point of view, the pipeline is a mistake… All the countries were against it except Germany and Austria."

The pipeline, which spans the Baltic Sea, is set to double the supply of cheap natural gas from Russia to Germany, which Germany says is needed to help it transition away from coal and nuclear energy.

However, the €10 billion ($12 billion) project has for years been dogged by delays and drawn fierce criticism from the United States and Germany's eastern EU allies like Poland.

Critics say the pipeline will increase Europe's dependence on Russian gas and Ukraine has described it as a "geopolitical weapon."