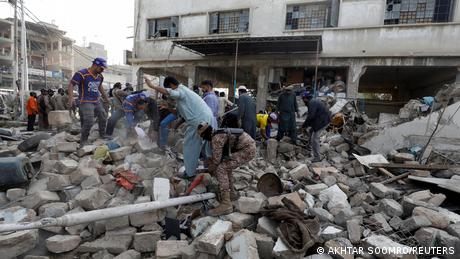 Police in Pakistan are trying to determine what caused a deadly blast near a bank in Karachi on Saturday, which killed at least 12 people.

Sabir Memon from the Karachi Trauma Center first told the AP news agency that 10 people were killed and 13 others had been injured from the explosion. Senior police officer Sarafar Nawaz Shaikh later said two more people had died of their injuries, raising the total death toll further.

Video recorded at the scene and posted on social media showed people standing near rubble of the Habib Bank Limited (HBL) branch as sirens sounded in the background.

What caused the blast?

Police have been unable to say for certain what caused the blast and are currently investigating possibilities. Police spokesman Sohail Jokhio said there appeared to have been an accumulation of gas in the sewer system beneath the Shershah branch of the HBL bank. It's not known what may have ignited the suspected gas leak.

The bank was destroyed in the explosion, with debris landing close to a neighboring fuel station.

According to Shaikh, explosives experts were attending the scene and at this point police were not ruling out the possibility of militant involvement.

"We will come up with a clear version once the explosives experts complete their job," Shaikh said.