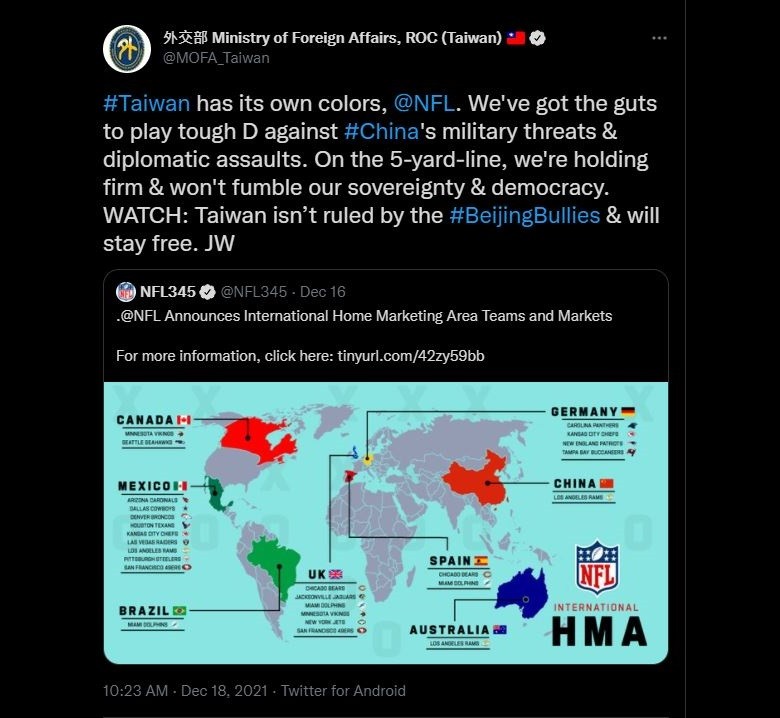 TAIPEI (Taiwan News) — Following the American National Football League’s (NFL) announcement of a map that marked Taiwan as part of China, Minister of Foreign Affairs Joseph Wu and the Formosan Association for Public Affairs (FAPA) both called for a correction.

Tweeting through the Ministry of Foreign Affairs’ (MOFA) Twitter account, Wu wrote, “Taiwan has its own colors, NFL. We've got the guts to play tough D against China's military threats and diplomatic assaults. On the 5-yard-line, we're holding firm and won't fumble our sovereignty and democracy. WATCH: Taiwan isn’t ruled by the Beijing Bullies and will stay free. JW.”

“NFL must stiffen up and not kowtow to China,” he added.

CNA cited Ken Wu as saying American Football is one of the most sophisticated sports in the world and one of the most symbolic American sports. As many Taiwanese immigrants and students who reside in the U.S. love football, he called for the NFL not to disappoint the hundreds of thousands of Taiwanese-American fans.