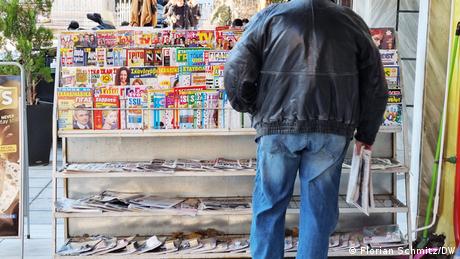 On November 13, 29-year-old investigative journalist Stavros Malichudis was scrolling through Facebook and enjoying his morning coffee when he stumbled across a report by the Greek media outlet EFSYN. The headline read "Greek authorities spy on citizens." He immediately ran outside and bought the newspaper. What he read confirmed his suspicions: the article was about him and his employer, Solomon, an investigative media outlet based in Athens.

Malichudis had been reporting on a 12-year-old refugee on the island of Kos, whose artwork had been featured in the French newspaper Le Monde. The journalist's name appeared in e-mails leaked from the National Security Service, showing that the authorities had him under surveillance.

According to Malichudis, the intimidation of media makers is on the rise. He also believes that he is not the only journalist under surveillance. "The government in general is not happy with people reporting on issues relating to migration, especially on how the government handles migration in Greece," he says.

The country's leading lawmakers are trying to maintain a positive narrative about how well Greece is using the €3.3 billion it received from the European Union to manage migration as a first reception country, Malichudis explains. Countless media reports have, however, raised serious doubts about this apparent success story. International media outlets, including Der Spiegel, The New York Times and Deutsche Welle, have presented evidence that Greek authorities illegally deport asylum seekers to Turkey on a regular basis.

Most Greek media ignore reports about illegal activities and refrain from asking the government uncomfortable questions. The result is a continuous tiptoeing around taboos that only a few journalists dare to disregard. Recently, however, long-standing Dutch correspondent Ingeborg Beugel did just that.

Beugel caused a scandal when she confronted Greek Prime Minister Kyriakos Mitsotakis during a joint press conference with his Dutch counterpart, Mark Rutters, on November 9. "When, at last, will you stop lying, lying about pushbacks, lying about refugees in Greece," she asked Mitsotakis before criticizing both the EU and the Netherlands for tolerating Athens' violent migration policy and for not allowing more asylum seekers into the country.

The Greek prime minister initially replied that he understood that "in the Netherlands you have a culture of asking exact direct questions to politicians, which I very much respect." Then, however, he got angry and accused her of insulting both him and the country. The incident led to a series of aggressive attacks against Beugel that depicted her as a Turkish agent and sought to undermine her credibility as a journalist. She received numerous death threats and was even physically assaulted.

International organizations, among them Human Rights Watch and Reporters Without Borders, are increasingly concerned about media freedom in Greece. A new law, which makes the sharing of fake news a criminal offense, is fueling their concern. According to legislation passed on November 11, anyone found guilty of spreading "false news that is capable of causing concern or eroding public confidence in the national economy, the country's defense capacity or public health" can be sentenced to "imprisonment of at least six months and a fine."

"It's extraordinarily vague," says Pavlos Eleftheriadis, professor of public law at the University of Oxford, pointing out how the new law could be used against journalists. His main concern, however, is rooted in the country's judicial power: "The Greek court system has proven to be unreliable in the protection of human rights." Eleftheriadis fears that the judiciary in Greece is highly politicized. "We have systemic problems in our judicial system, but unfortunately, this government is not interested in this." According to Eleftheriadis, the system should have been reformed years ago, but nothing has been done. This is why he sees the new law as a "threat to free speech."

Stavroula Poulimeni and a group of Greek journalists that is committed to free speech and independent journalism founded Alterthess, a small cooperative news website, in 2010. Since then, Poulimeni has been covering the environmental and social impact of gold mining activities in Halkidiki, a region of outstanding natural beauty in northern Greece. In October 2020, she reported on the conviction of two senior executives of Hellas Gold SA over the pollution of surface waters and environmental damage. A year later, after the Court of Appeal confirmed the verdict, Stavroula Poulimeni and Alterthess were served with a lawsuit on behalf of Efstathios Lialios, one of the convicted executives, requesting €100,000 compensation for publication of the story and the illegal processing of personal data related to a criminal conviction. If the sum is not paid, Poulimeni could face a year in prison.

"It is a clear attempt to make us stop covering the environmental crime that is happening in Halkidiki," Poulimeni told DW, adding that the lawsuit is a SLAPP, a strategic lawsuit against public participation. SLAPPs seek to intimidate critics and silence people who are trying to report on matters of public interest. Alarmingly, use of these SLAPPs seems to be increasing in the EU.

Poulimeni admits that dealing with such lawsuits not only takes a huge amount of time, but also a psychological toll. She is quick to stress, however, that she is not afraid. "The company is trying to intimidate us but so far, it has succeeded in doing quite the opposite: it has motivated us to engage more with this topic," she says. Alterthess is one of a very small number of media covering the topic of gold extraction in Halkidiki and monitoring Hellas Gold SA's activities. "There is a weird silence around gold in Halkidiki imposed by mainstream media," she says, adding that many media are in favor of the company, as it funds them through advertising.

The financial viability of Greek media is one of the challenges threatening press freedom that worries Nikos Panagiotou, associate professor at the School of Journalism and Mass Communications at Aristotle University of Thessaloniki. "When the press is not financially independent, its credibility and independence will be undermined in the long run. The media outlets will depend on other sources of funding to survive," he told DW.

While international organizations such as the International Press Institute have expressed their grave concern over this SLAPP, and two parties have raised questions about it in Parliament, coverage of the lawsuit has been limited to leftist and independent media outlets.

Panagiotou also points to another important factor that is shrinking media pluralism: media ownership. "We have only a small number of people owning a big percentage of media outlets," he says.

These incidents, together with the killing of veteran journalist Giorgos Karaivaz, attacks on reporters and government attempts to restrict media access have led Media Freedom Rapid Response, a mechanism that monitors press freedom violations in Europe, to recently launch an online fact-finding mission to Greece to assess media freedom and the safety of journalists in the country.