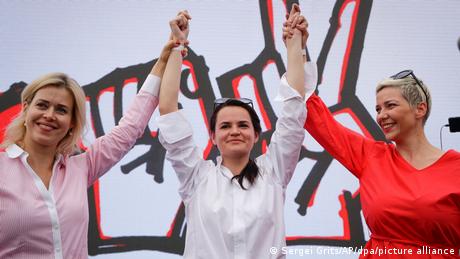 Belarusian opposition leader Sviatlana Tsikhanouskaya was one of three winners of the 2022 Charlemagne Prize announced on Friday.

The chairman of the Charlemagne Prize Directorate, Jürgen Linden, said the panel wanted to recognize the "courageous commitment to freedom, to democracy, to the preservation of human rights and thus to European values" of Maria Kolesnikova and Veronika Tsepkalo, along with Tsikhanouskaya.

The laureates formed a "unique role model" against dictatorship, oppression and an unjust state, Linden said in Aachen.

The recipients received the award "with great pleasure," Linden added.

The trio will receive the honors in an award ceremony on May 26, 2022, at Aachen City Hall.

Tsikhanouskaya, 39, has become the face of the opposition to Alexander Lukashenko, who has led Belarus since 1994. Tsikhanouskaya contested last year's election in Belarus in place of her husband Sergei Tikhanovsky, a blogger and critic of Lukashenko was sentenced to 18 years in prison earlier this week.

The outcome of the 2020 election in Belarus, which saw Lukashenko secure a large majority, has been rejected by the United States and the European Union.

Kolesnikova, meanwhile, is serving an 11-year sentence in Ukraine. Linden said her sister would join the other two award winners at the ceremony in Aachen next year.