TAIPEI (Taiwan News) — French lawmakers of various political stripes delivered a message of goodwill and support for Taiwan's right to self-determination and international inclusion during their visit to the country, which concluded Sunday (Dec. 19).

At a Ministry of Foreign Affairs (MOFA) -hosted press conference Friday (Dec. 17), Francois de Rugy, who heads the Taiwan-France Friendship Group and organized the delegation, pointed out that the National Assembly overwhelmingly passed a resolution last month supporting a greater role for Taiwan in international organizations. The resolution came on the heels of a similar one passed by the French Senate.

Delegation members said it is imperative Taiwan be allowed to "take its place" in global bodies such as the International Civil Aviation Organization and return to the World Health Organization as an observer.

The parliamentarians invited by de Rugy represent the five major political factions of the lower chamber, signifying the breadth of support the East Asian country now enjoys in the halls of the French parliament, legislator Jean-Luc Reitzer said during the press event.

Other chief aims of the visiting legislators beyond a show of moral support are identifying areas of common concern for Taipei and Paris and exploring potential economic, security, and cultural exchanges.

The group also agreed on the importance of maintaining the status quo in the Taiwan Strait. In light of China's increasing power projection in the Asia-Pacific and threats toward Taiwan, Taiwan's security must be upheld, de Rugy insisted.

French Assembly member Frederique Dumas said when it comes to China, the French tend to focus more on the power struggle between China and the U.S. and the situation in Xinjiang region. She stated that Taiwan is on the front line of the competition between two models — an authoritarian one versus a democratic one that values human rights — thus Taiwan's future is humanity's future. "I would say that I am Taiwan, but each of us is Taiwan."

Dumas said the resolution is just a start, however, and that "at this moment in history, we have much to do." France and Europe as a whole must do more to stand up to China with more concrete measures, without fear of reprisal as Australia and Lithuania have done, she said.

China downgraded relations with Lithuania last month to the level of charge d'affaires after the Baltic country allowed a Taiwanese representative office to open in the capital of Vilnius. Australia recently joined the diplomatic boycott of the Beijing Winter Olympics while under heavy Chinese sanctions for its earlier calls for an investigation into the origins of COVID-19. 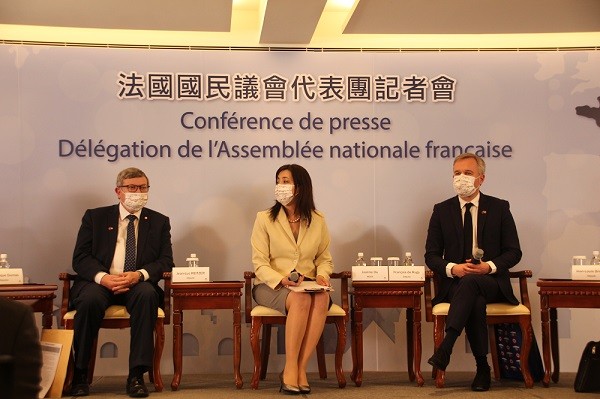 Asked how they would respond to the Chinese government accusation that their trip was for political gain and out-of-sync with France's "one China" policy, National Assembly member Jean-Luc Reiter stressed that they are free to have a dialogue with whomever they choose and that Beijing should respect their freedom to associate.

Besides diplomatic corps, parliaments also have a diplomatic role to play in engaging with other countries, parliamentarian Jean Francois Mbaye said.

Legislator Aina Kuric said Taiwan has vital expertise to share with the world. The democracies of the world should band together and protect each other's interests in the face of authoritarianism, she continued, adding she regrets France had not extended more support to Taiwan earlier.

With France taking over the presidency of the EU Council for the first half of 2022, it will have the responsibility to explore how the bloc's relationship with Taiwan can be expanded to the benefit of both, de Rugy said.

On Taiwan's hope for a bilateral investment agreement with the EU next year, he said he has pressed the French government on the issue. He stressed, however, that France places a high value on reciprocity and would expect Taiwanese investments in return.

De Rugy also said he was impressed by Taiwan's good-natured citizens, the vitality of its economy, and its resilience amid the COVID-19 pandemic. He also noted Taiwan's goal of achieving net-zero carbon emissions by 2050.

President Tsai tweeted her thanks to the French visitors Saturday for their "continued efforts to deepen the friendship between our nations," adding that shared values are the foundation of the "wide-ranging cooperation" between Taipei and Paris.

The delegation departed Taiwan on an Eva Air flight Sunday at 11:50 p.m.

We truly appreciate your visit & continued efforts to deepen the friendship between our nations. #Taiwan & #France enjoy wide-ranging cooperation founded on these shared values, & we hope to engage in further exchanges to bring our countries & peoples closer together. https://t.co/QqBG2VF2lM