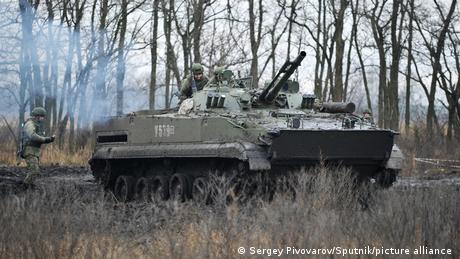 European Union leaders on Thursday agreed to renew existing economic sanctions imposed on Russia in response to its annexation of Ukraine's Crimea peninsula.

The heads of government for the 27 member states also urged Moscow to halt its military buildup near the border with Ukraine and to return to talks led by France and Germany.

What did the leaders in Brussels say?

Leaders meeting in Brussels agreed to renew for six months an existing raft of economic measures aimed at putting pressure on Moscow.

The EU already added the Wagner Group, a Russian mercenary firm, to its existing sanctions list at a meeting of foreign ministers on Monday.

In a joint statement signed off on at the summit, leaders insisted on "the urgent need for Russia to deescalate tensions caused by the military buildup along its border with Ukraine and aggressive rhetoric."

The leaders repeated a message coordinated with the United States, the United Kingdom and the Group of Seven industrial nations in recent weeks. This states that "any further military aggression against Ukraine will have massive consequences and severe cost in response, including restrictive measures coordinated with partners.''

However, both German Chancellor Olaf Scholz and French President Emmanuel Macron said the door was open for talks with Moscow.

They urged a return to the "Normandy format" — a four-way dialogue between Paris, Berlin, Kyiv and Moscow — to put into practice the 2015 Minsk accords, a blueprint for a political settlement.

"We have a very good format, the Normandy format, that we want to reactivate, reenergize," Scholz told reporters. "It won't be easy, we should not be naive, and we should be very clear when it comes to the integrity of borders.''

The EU leaders also agreed in a resolution that "any new sanctions package should include the Russian officer corps and flag officers involved in the planning of a possible invasion, as well as the immediate circle and oligarchs 'in the orbit of the Russian president and their families.'"

The document said this could involve the freezing of financial and physical assets in the EU, as well as travel bans and the possible exclusion of Russia from the SWIFT system of international payment.

Lithuanian President Gitanas Nauseda, whose country borders Russia, warned that Moscow's actions were precipitating one of the most precarious security situations since the Soviet Union collapsed.

The EU's appeal comes as Russia says it has given draft documents to the US outlining security arrangements that it seeks to negotiate with Washington and the rest of the NATO military alliance.