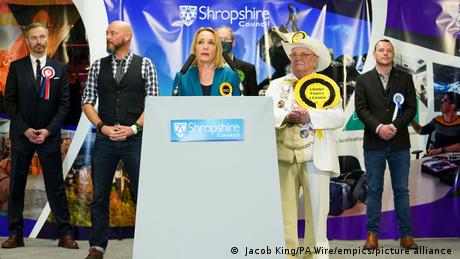 UK Prime Minister Boris Johnson's ruling Conservative Party lost a seat that had been safe for decades in a surprise by-election defeat on Friday.

The usually staunchly conservative voters in the sleepy rural constituency of North Shropshire elected a lawmaker from the Liberal Democrat party to represent their constituency in the British Parliament.

North Shropshire had consistently sent a Conservative MP to London since its creation in 1983 — the predecessor borough known as Oswestry was also Conservative without interruption from 1906 — with the Conservatives re-winning the seat in 2019 with a very comfortable 23,000 votes.

Liberal Democrat winning candidate Helen Morgan — who won by 6,000 votes — had a message for Johnson in her victory speech: "Your government, run on lies and bluster, will be held accountable. It can and will be defeated."

The Prime Minister has been the subject of scandals about breaking lockdown rules last winter and recently suffered a major rebellion from his party MPs in Parliament.

Why was there a by-election?

By-elections are frequently used by voters as a way of punishing sitting governments.

However, Friday's result came as a shock not only because of where it happened, but also because the Conservatives pulled off a successful by-election victory in May in Hartlepool.

North Shropshire's by-election was triggered by the resignation of the MP who had held the seat since 1997, Owen Patterson, after he was found to have broken lobbying rules.

The controversy over Johnson's attempt to defend Patterson was surpassed by the next controversy when reports emerged of his staff holding Christmas parties last year despite rules implemented by his own government which told the public to cancel their festive plans.

The North Shropshire constituency is one of 650 that send lawmakers to Parliament and the Conservatives still control a clear majority of the seats.

Johnson's promise to "Get Brexit Done" won over large swathes of the country in 2019 amid faltering Brexit negotiations.

However, the loss of the by-election has been seen as a sign of voter dissatisfaction and may further fuel the voices within Johnson's own party that have begun to call for him to step down.

The next general election in the UK is set to take place in 2024.