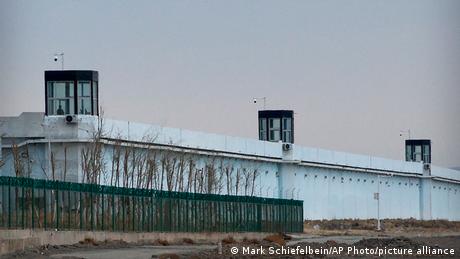 The US Department of Commerce announced sanctions Thursday targeting Chinese biotechnology and surveillance firms it asserts are involved in the mass repression of the Uyghur minority in western Xinjiang province in China.

China's Academy of Military Medical Sciences was among the targets of Thursday's action, along with its 11 research institutes that focus on supporting the Chinese military using biotechnology.

Gina Raimondo, the US secretary of commerce, said in a statement China "is choosing to use these technologies to pursue control over its people and its repression of members of ethnic and religious minority groups."

She added, "We cannot allow US commodities, technologies, and software that support medical science and biotechnical innovation to be diverted toward uses contrary to US national security."

What is happening with the sanctions?

The Commerce Department has the authority to sanction individuals, organizations and companies who pose a risk to US national security or conflict with US foreign policy interests. It can restrict the export, reexport and in-country transfer of items subject to regulation. US companies or individuals must apply for permission to do business with the sanctioned entities.

In a release, the department said it also took action to sanction entities in Georgia, Malaysia and Turkey for facilitating technology transfers to Iran for military use.

The Biden administration said last week it would not attend the Beijing winter Olympics next year. Instead, US officials are opting for a diplomatic boycott, citing China's "egregious human rights abuses and atrocities in Xinjiang."

US athletes, however, will still participate though without the usual delegation of American dignitaries in attendance to cheer them on.

This week, the White House came out in support of bipartisan legislation to ban imports from Xinjiang to the US unless companies can prove the goods were not the products of forced or slave labor.

China denies any rights abuses or genocide are occurring at present in Xinjiang. Beijing insists the mass repressions and internment in camps it terms "re-education camps" are vital for the country's national security in its fight against terrorism and a separatist movement.