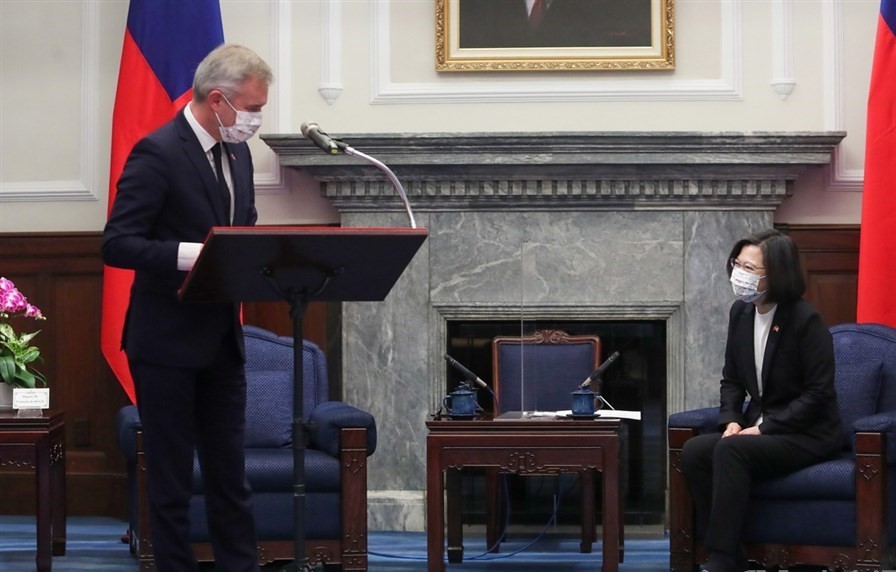 Tsai said that Taiwan-France relations have progressed tremendously this year, pointing to resolutions passed by the French Senate and the National Assembly supporting Taiwan’s international participation. She said she felt "powerful energy" coming from the French Parliament from all the recent support and that this has touched the hearts of Taiwanese “quite a bit,” the Liberty Times reported.

The president noted that bilateral exchanges in the past few years have been very close and productive. In the post-pandemic era, the two countries have many opportunities for cooperation in areas such as supply chain restructuring, internet security, and technological innovation, she said.

She added that she hopes a bilateral investment agreement between Taiwan and the EU can be finalized once France assumes the presidency of the Council of the EU next year.

Tsai mentioned that in the face of rapid changes in the world and the continued expansion of authoritarianism, democratic partners should work together. “Taiwan will fulfill its international responsibilities and make greater contributions to peace and stability in the Indo-Pacific and global prosperity together with like-minded EU partners,” the Liberty Times cited her as saying.

Rugy pointed out in a speech that seven of the nine political groups had voted in favor of the National Assembly’s resolution urging the French government to back Taiwan’s participation in international organizations. “We hope that France and Taiwan will develop fruitful cooperation,” he said.

Rugy stated that the France-Taiwan Friendship Group not only cares about public policies but also aims to strengthen bilateral government exchanges. The group also considers the vitality of Taiwan’s civil society, he said, adding that this is based on Taiwan’s “remarkable democratic success” over more than 30 years.

The six-member delegation, which arrived Wednesday, will also meet with Premier Su Tseng-chang (蘇貞昌), Legislative Yuan President You Si-kun (游錫堃), Minister of Foreign Affairs Joseph Wu (吳釗燮), and other ministers and officials, according to a Ministry of Foreign Affairs press release.

Additionally, the delegation will be treated to a banquet hosted by You and Wu. The group will depart on Sunday (Dec. 19).