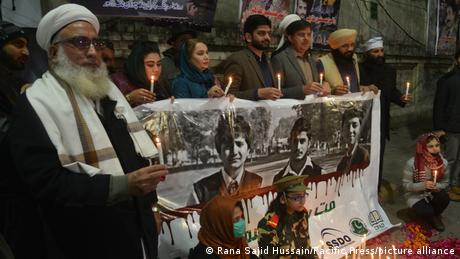 For Shahana Ajoon, every December brings grief, anger and agony for her family which is still struggling to come to terms with the deadly terror attack on a school in the north-western Pakistani city of Peshawar, seven years ago.

Ajoon's torture is mirrored among the parents of the 132 school children who were killed in the massacre on December 16, 2014, perpetrated by the Tehreek-e-Taliban Pakistan (TTP) militants, in what remains one of the worst terror attacks in the history of Pakistan.

Last month Imran Khan's government signed a month-long ceasefire agreement with the TTP — a militant group which carried out several attacks on Pakistan's security forces and civilians in the past 15 years.

The group has not extended the ceasefire agreement and stated last week that Islamabad has not honored the truce and failed to release their 102 fighters imprisoned in the Pakistani jails.

There was no immediate comment from Pakistani government officials to a DW request.

Soon after the truce ended, the militant group attacked police officers providing security to the polio vaccination team in the northwestern Tank district. Their gunmen killed one police official and wounded another.

Their spokesperson Mohammad Khurasani, claimed responsibility for the attack in the statement.

Every year, this very day opens old wounds for Ajoon and her family, while thinking of the brutal massacre in their children's school. She still vividly remembers that foggy December morning. As the hours-long horror unfolded, this Tuesday would be a day like no other.

Ajoon and Ajoon Khan lost their son Asfand Khan, an eighth-grade student. They could not gather the courage to look at the bullet wounds on their son.

"It was unbearable for us to see the wounds, we heard he was shot in the head multiple times from a very close distance. Seven years have passed, and it seems it was yesterday," Ajoon told DW, with a shaking voice and tears in her eyes.

Parents and relatives mourning the death of their children are still reeling from that deadly massacre. They recall their children's conversations with them, their memories and looking at their belongings, including uniforms, pens, school bags and books.

Ajoon Khan told DW: "That day, I was informed by my cousin about the school under attack and everyone was searching for their children. I rushed to the school where ambulance sirens were blaring all around. I was asked to go to hospitals to search for my son, among the dead bodies."

"Hours passed, the sun had set, and it was dark, and I was still searching for my son inside the two main hospitals, Lady Reading hospital and Combined Military Hospital. Hopes of Khan's survival were raised when I could not find the body initially and I was praying all the time," he continued.

"Then I got the desperate message from my cousin, 'We have found Khan's body. He is no more.' I was shaken and broken, and I felt as if it was the end of the world."

Eight gunmen stormed inside the school and started firing indiscriminately with automatic weapons, entering the classrooms and main auditoriums, and setting off heavy explosives.

"I was told that my son's head was opened and later stitched… I could not look at him, it was unbearable for me. We lowered his wooden coffin with his uniform entirely soaked in blood and buried his motorbike keys along with him," Khan said. "The only thing we kept from his pocket was his pen."

Ajoon was speaking from her home in Peshawar, a sprawling gritty metropolis in the northwestern province of Khyber Pakhtunkhwa, bordering Afghanistan and where millions have been affected by the militant violence.

"We used to call Asfand 'Sonu' — his nickname — and he said my recognition is my real name. A week before the incident he said to me, 'Mama one day people will recognize me with my name Asfand' and I now realize he was right," Asfand's mother explained.

Since the Peshawar school attack, analysts believe the country's counterterrorism posture has significantly changed its trajectory to curb militancy through drastic measures and launching all over assaults against TTP in the past few years.

"Now any pardons given to TTP would have undermined those commitments, and the conducted peace talks will impact the overall counterterrorism narrative that the state claims to hold firm. The initiation of the reconciliation process with TTP was bound to be short-lived," Saman Rizwan, an Islamabad-based policy research analyst, told DW.

"Expecting the militant group to surrender its only legitimate tool of violence is an overstretch. The history of violence associated with TTP is enough to acknowledge the underlying motivations of the group," she said.

The families of the children are still awaiting justice and their case has been pending in the Supreme Court.

Dost Muhammad, who lost his 14-year-old son Asad Aziz that December day, told DW: "I saw the news on the television and rushed to the school. Our case against the brutality is pending in the courts and our government is negotiating with them. They could not feel our pain and suffering."

"The tragedy was so terrifying that schools remained closed for nearly a month across the entire Khyber Pakhtunkhwa province. People were terrified and parents preferred to keep their children at home and even I was reluctant to send my children to the school," Muhammad recalled.

'He was a shining star - but he left us'

After the school attack, the most comprehensive military operation against the militant group was carried out, which significantly reduced their capacity to launch attacks in Pakistan.

"I miss my Asfand," said Ajoon. "Whenever I saw his cousins, class fellows and friends in the family functions. They are all grown up men now. He was a shining star and brilliant student but he left us."