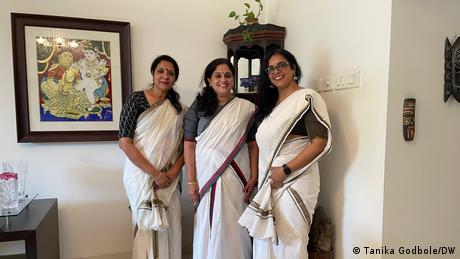 Aparna Gopinathan considers herself privileged because her daughters will carry forward her family name. In a country infamous for its preference for sons, Gopinathan comes from a family that follows a system of matriliny, which is now unusual in her southern state of Kerala.

The system of matriliny in Kerala was most commonly seen among Nair people, a regional group of Hindu castes. In previous centuries, Kerala's matrilineal system was widely observed not only among Hindus, but also among some Muslim and Christian communities.

More than half of the population is said to have followed this system of inheritance over 200 years ago. However, the practice largely faded after the 19th century.

Now, Gopinathan's is one of the few families in the state still observing the system.

How did the system begin?

There are many theories as to how the system came to exist in a largely-patriarchal India. A common theory is that the Nair men trained to be in the armed forces of local armies. The women were the ones who stayed behind, brought up the children and looked after the property, and were thus the ones who inherited the land.

In medieval times, fields and land fell under the purview of temples, and brahmins, the highest figures in the caste structure, owned this land. In the 16th century, Namboodiri brahmins migrated to Kerala and became owners of fields and others land in the region.

"Among Namboodiri brahmins, only the eldest were allowed to marry. The younger men in the families went to Nair women, and entered relationships known as sambandham ," Dr. Lekha NB, an assistant professor of sociology at the Sree Narayana College in Thiruvananthapuram, told DW.

The tharavad, or joint family, followed a matrilineal line. But at the helm of it was the karnavar — the male head of the family, which was usually the eldest female family member's son or brother.

The women of the household would stay back in their maternal homes, while the men often relocated to their wives' houses. Women of the family gave birth to future generations in the pettmuri or "birth room," and their children stayed on in the mother's home.

Unlike in many other parts of India, there was no widow system. Additionally, the women did not continue to live with the husband's family after his death, and there were no restrictive rules guiding a widow's life.

Nair women also had caste mobility, unlike their male counterparts. As land owners, they had their own social status and were not financially dependent on a male family member. They did not enter traditional marriage systems, and their sambandhams were social contracts which allowed them to be polyandrous and terminate the relationship at will.

Urmila Ranjit from central Kerala, whose family also followed a system of matriliny, said the higher caste men would marry women from the lower castes, and visited their wives only occasionally. "They would send wealth to the women. In those days, wealth meant rice, bananas and such goods."

The "weddings" were not officiated by a priest, and functioned more as social contracts, rather than religious bonds. "The women kept the man's umbrella and footwear outside the door, as a way of communicating that he was no longer welcome," Ranjit told DW.

"Even the kings of the Travancore Kingdom followed a system where the king's sister's son became the descendant. Royals were allowed to marry Nair women. Sexuality was celebrated in society, and there was no importance attached to chastity," Lekha told DW.

Nair men who went to study in English institutions in India and abroad faced stigma for their family structures.

In the book The Ivory Throne, author Manu S Pillai notes that the relationships, or sambandham were frowned upon by others in society, as women were called mistresses, and Nair men were called bastards and faced derogatory comments about their "backward systems."

The decline of this system of matriliny took place during the late 19th century, especially as the prominence of British rule grew. "This social system was vastly different from the western Christian patriarchal family structure. This led to the delegitimization of the system," AF Matthew, a professor of sociology from the Indian Institute of Management Kozhikode in Kerala, told DW.

Medha, a 27-year-old editor and Nair woman who wishes to remain anonymous, told DW that the women in her grandparents' generation received the majority of the inheritance, but that things have since changed. "Nowadays, inheritance is more equally distributed among the genders in our family. Both the husband and the wife have an equal say in the financial and day-to-day decisions of the household," she said.

Gopinathan said: "Sometimes, the women felt the karnavar [male head of the family] misused their power. Another reason was that the male members of the family wanted more rights over their children. This is why the system gradually declined."

The family structure evolved to hold more equality between the sexes, but Ranjit and Gopinathan still feel closer to their mother's side of the family. They also prefer passing on family heirlooms to their daughters, rather than their sons, or sons' wives.

"Even now, compared to our peers, Nair women are bolder. From a young age, we have been used to speaking our minds, and voicing our opinions. We were not told to keep quiet," said Gopinathan.

Ranjit added that Nair women were often less educated compared with women coming from Christian communities in Kerala. Women from matrilineal households often dropped out of school and university.

"In our families, women were made proficient in music, dance, and other creative pursuits. But we were not taught practical matters such as running a household or budgeting," she said.