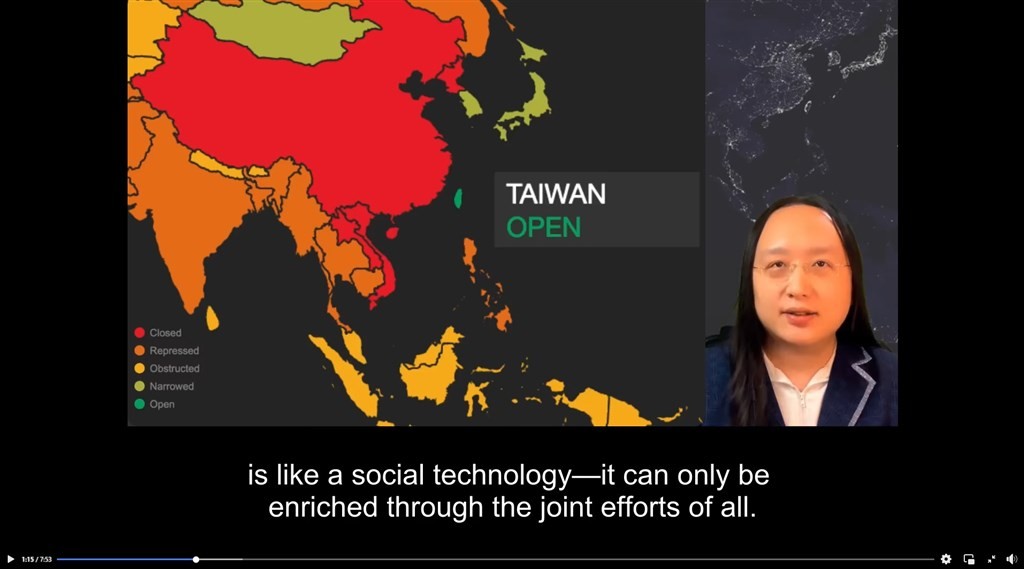 TAIPEI (Taiwan News) — Senator Marco Rubio on Wednesday (Dec. 14) sent a letter to President Joe Biden demanding answers after the video feed of a presentation by a Taiwanese official was cut after it displayed a map of Taiwan during the Summit for Democracy last week.

While giving a presentation during the summit on Friday (Dec. 10), Digital Minister Audrey Tang (唐鳳) displayed a map by Civicus that showed Taiwan in green for having an "open" civic space, while China was shown in red for being "closed." When the moderator returned to Tang only a few minutes later, there was only audio, and a disclaimer surfaced stating, "Any opinions expressed by individuals on this panel are those of the individual, and do not necessarily reflect the views of the United States government."

Sources told Reuters that the video feed was axed because White House officials feared offending China. However, the State Department claimed that "confusion" over screen sharing had led to the incident, calling it an "honest mistake."

Behind the scenes, there was reportedly an angry "flurry" of emails between U.S government agencies about Tang not having shown the map during "dry-run" sessions before the summit. Washington complained to Taipei about the map, while Taipei was agitated its minister had been cut off.

On Tuesday, Rubio announced that he had sent a letter to Biden demanding an explanation for "censoring Taiwan" at the summit and committing an "act of appeasement to Beijing." Rubio wrote that this was yet another example of how "decades of failed engagement policy should have taught us by now that making concessions to Beijing is a one-sided and fruitless endeavor."

Rubio characterized the cutting of the video feed as "downgrading" Taiwan's representation and signaled "weakness rather than resolve."

He also criticized the Biden administration for failing to invite Taiwan's democratically elected head of state rather than appointed officials to participate in the summit. He claimed that when other countries had tried to delegate the presentation to lower-level officials, they were met with "stiff resistance" from White House officials.

In his letter, Rubio demanded answers to the following questions:

Rubio closed by expressing hope that at next year's summit, the U.S. will address these issues and prove that the U.S. commitment to democracy "will not be calibrated in the futile pursuit of the approval of our authoritarian rivals."