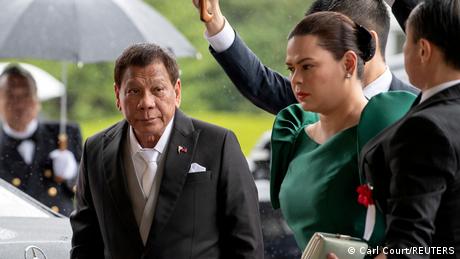 Philippines President Rodrigo Duterte, 76, withdrew his candidacy for Senate in the country's elections next May just one month after his eleventh-hour entry into the race, the election commission's spokesman said.

That spokesman, James Jimenez, wrote on Twitter: "The President has filed his withdrawal from the Senatorial elections."

Duterte is prohibited by the constitution from seeking another term as president. His six-year term will conclude next June.

Many speculated his decision to run for Senate was a means of staying in politics while confronting international investigations into his deadly handling of the country's war on drugs.

Neither Duterte nor his office or political party provided a reason for his decision to withdraw. Previously, Duterte had said he would run for vice-president, then he announced he would retire from politics altogether, before subsequently announcing his now-withdrawn Senate run.

In a late night address to the nation Monday, Duterte said his team would "ensure honest, peaceful, credible, and free elections" in 2022.

What is behind the decision to withdraw?

Observers of Philippine politics suggest his latest decision does not necessarily signal a withdrawal from the political scene altogether.

Antonio Contreras, a political science professor at De La Salle University in Manila, told AFP: "It's very dizzying." He suspects the Dutertes "probably already made sure that somebody is going to act on their behalf to protect their interests."

Elections next May will see thousands run for 18,000 political posts from president on down to the municipal level.

Duterte's daughter Sara is running for vice-president and his son Sebastian is running for mayor in Davao City, where his father previously served as mayor prior to becoming president. Sara Duterte is currently the mayor of Davao City. Under election rules, Duterte could theoretically supplant another candidate of the same surname should that candidate be disqualified or die.

The announcement of Duterte's withdrawal from the Senate race came hours after his aide and chosen successor, Christopher "Bong" Go, withdrew his candidacy for president.

What is the current status of the race for president?

According to a recent survey carried out by respected polling outlet Social Weather Stations, Ferdinand Marcos Jr., the son of the late dictator, is currently leading in the race.

Sara had been expected to run for president but instead appears to have formed an alliance with Marcos Jr., the current frontrunner.