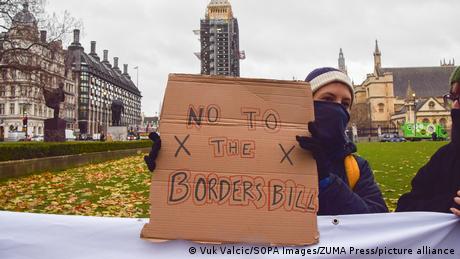 What is the Nationality and Borders Bill?

In 2014, these powers were extended to include foreign-born British citizens without dual nationality, who can be made stateless so long as the government believes they are eligible for foreign citizenship and if they have acted "in a manner which is seriously prejudicial to the vital interests of the United Kingdom, any of the Islands, or any British overseas territory," according to the legislation.

What does the Clause 9 amendment mean?

Clause 9 of the Nationality and Borders Bill, which was added in November, essentially paves the way for the government to strip individuals of their British citizenship without prior notice on practical grounds, for example if authorities do not have a person's contact details, in the interests of national security or "in the public interest."

Here is the relevant passage highlighting the amendments to the Nationality and Borders Bill regarding the "Notice of decision to deprive a person of citizenship."

In section 40 of the 1981 Act (deprivation of citizenship), after subsection (5) (which requires notice to be given to a person to be deprived of citizenship) insert "(5A): Subsection (5) does not apply if it appears to the Secretary of State that —

(a) the Secretary of State does not have the information needed to be able to give notice under that subsection,

(b) it would for any other reason not be reasonably practicable to give notice under that subsection, or

(c) notice under that subsection should not be given —

(i) in the interests of national security,

(ii) in the interests of the relationship between the United Kingdom and another country, or

(iii) otherwise in the public interest."

There are concerns that Clause 9 will disproportionately target ethnic minority Britons and make them feel unsafe and unwanted.

"It will apply to only a small number of people, but [like previous legislation, mainly in the field of counterterrorism targeting British Muslims] has a ripple effect on entire communities, diminishing their sense of security. It also emboldens the far right and could lead to more anti-Muslim racial violence, as it tells the population that Muslims are a dangerous enemy requiring special measures," Frances Webber, vice-chair of the UK's Institute of Race Relations, told DW via email.

A precedent was set in 2019 in the case of Shamima Begum, a UK-born woman who joined the "Islamic State" group as a teenager and had her British citizenship removed at the age of 19 on national security grounds.

At the time, the government argued that, despite Begum not having a foreign passport, she would not be made stateless. Bangladesh, where she was born, considers anyone born to a Bangladeshi parent to be a citizen from birth until the age of 21.

In a statement, the UK's Home Office said: "British citizenship is a privilege, not a right. Deprivation of citizenship on conducive grounds is rightly reserved for those who pose a threat to the UK or whose conduct involves very high harm. The nationality and borders bill will amend the law so citizenship can be deprived where it is not practicable to give notice, for example if there is no way of communicating with the person."

The amendment has triggered enormous outrage, not only from human rights groups, who say that aside from creating major obstacles to people seeking asylum, it blatantly contravenes the UK's obligations to the UN's Refugee Convention and the European Convention on Human Rights.

This is what people have been saying about it online as it was passed in the House of Commons last week:

Impact on immigrants and asylum-seekers

The bill, which passed a Commons vote last week and will be debated by Parliament's upper house, the House of Lords, on January 5, also aims to tackle illegal immigration and inadmissible asylum claims made by undocumented people. It would also criminalize them and anyone taking part in refugee rescue missions in the English Channel. Border force staff would be granted immunity if people die in the English Channel during so-called pushback operations.

The UK's Joint Committee on Human Rights (JCHR) says the bill breaches human rights law and the Refugee Convention and has called on the government to address those measures that are incompatible with human rights.

While those deprived of citizenship are mainly British Muslims from South Asia, the Middle East or North Africa, the measures could also be felt by EU citizens.

In particular it could effect the admissibility of asylum applications from EU countries, for example, "preventing Roma from eastern Europe from claiming asylum despite treatment which would qualify them as refugees," said Webber.