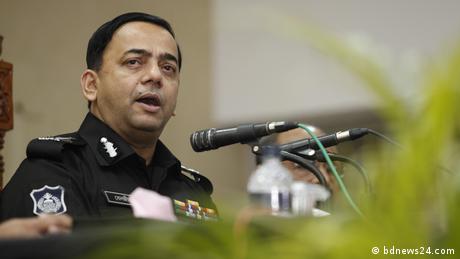 Washington's sanctions against Bangladesh's Rapid Action Battalion (RAB) police force, which is accused of involvement in hundreds of extrajudicial killings, have drawn a sharp reaction in Dhaka.

While the government denounced the sanctions, rights activists believe they are long overdue and described the force as a "death squad” that operates with impunity.

The US last week imposed sanctions against RAB and seven of its current and former top officials for human rights abuses and abductions, in addition to extrajudicial killings.

"Widespread allegations of serious human rights abuse in Bangladesh by RAB — as part of the Bangladeshi government's war on drugs — threaten US national security interests by undermining the rule of law and respect for human rights and fundamental freedoms, and the economic prosperity of the people of Bangladesh," the US Treasury Department said in a statement.

"NGOs have alleged that RAB and other Bangladeshi law enforcement are responsible for more than 600 disappearances since 2009, nearly 600 extrajudicial killings since 2018, and torture. Some reports suggest these incidents target opposition party members, journalists, and human rights activists," the statement added.

In a separate statement, the US State Department announced travel bans on Benazir Ahmed, the current inspector-general of the Bangladesh Police and former director-general of RAB.

Both were targeted for their "involvement in the May 2018 extrajudicial killing of Teknaf City Municipal Councilor Ekramul Haque in the Bangladeshi coastal district of Cox's Bazar."

Haque's wife, Ayesha Begum, still remembers the evening of May 26, 2018, when some members of the security forces, including RAB, picked her husband up from their tiny apartment in Teknaf.

"My husband was not involved in any drug trading. He was innocent and that's why we didn't suspect anything wrong when RAB took him from home," Begum told DW.

But later in the evening, after several attempts, Begum got through to her husband's smartphone and heard the ambient audio of his execution in a "staged gunfight."

Begum later published the recording of the phone call where her husband's last words were recorded, along with the sound of gunshots that had killed her husband.

"RAB killed my husband. I still don't know what his crime was. He was an innocent man," Begum told DW.

Ever since the incident, which RAB claimed was "crossfire," Begum and her two young daughters have been living their lives in fear. They have also been barred from seeking justice.

"We wanted to file a case to get justice for the murder of my husband,” she said, but her relatives were unable to do so as they were subjected to constant surveillance by RAB. "We have been threatened into staying silent."

While the killing of Ekramul Haque has been widely criticized in local media and human rights groups have demanded an independent investigation, the government has shown no interest in holding the involved RAB officials accountable.

Human rights groups have reported many other incidents like Haque's, in which the victims were killed by RAB and other forces in similar situations.

The paramilitary force was formed by the then-Bangladesh Nationalist Party (BNP) government in 2004 to battle increasing extremism and serious crimes, but it has been dogged by controversies and accused of gross human rights violations, including staging gunfights to kill alleged criminals.

Meenakshi Ganguly, the South Asia director of Human Rights Watch (HRW), thinks that RAB abuses have occurred regardless of political leadership, whether under the Awami League since 2009 or under the military and BNP-led governments before that.

"Some of the victims are criminal suspects who were denied due process and instead deemed guilty. This is particularly concerning because scores were killed during the so-called war on drugs," Ganguly told DW.

"Political opponents of the ruling Awami League party or government critics have also faced abuses by RAB and other security forces," she added.

Human Rights Watch has, meanwhile, named the force a "death squad" and demanded its immediate disbandment.

Will the measures make a difference?

Experts believe the sanctions will deliver a clear message to the Sheikh Hasina government that her country's human rights record needs improvement.

"Any sanctions are significant, and especially when they target a key security institution like RAB. The fact that they were announced on International Human Rights Day is also significant," Michael Kugelman, a South Asia expert at the Washington-based Woodrow Wilson Center for Scholars, told DW.

"It appears the US wanted to make an example of Bangladesh's human rights record and the US' unwillingness to tolerate it, in the strongest possible terms," he added.

Kugelman additionally pointed out that the Bangladesh sanctions came in a statement that included China, North Korea, and Myanmar.

"If you worry about your global image, that's not the company you want to keep. You never want to be clubbed with those countries," he stressed.

Sanjida Islam, an organizer of Mayer Daak, which represents families of the victims of enforced disappearances, welcomed the sanctions on RAB.

Islam's brother was taken away, allegedly by RAB officers, in December 2013, and he hasn't returned home since. She has created a database of at least 532 similar incidents that took place in the past decade.

"We tried to file cases to find our loved ones, but the police didn't take our complaint when we mentioned RAB's involvement. Even though we have filed a writ petition before the High Court for investigations to find the victims, nothing happened," she told DW.

She hopes that things will improve soon with the new sanctions in place.

"It is a perfect move by the US. But more officers who were involved in the abductions and enforced disappearances should have been included," she insisted.

Bangladeshi officials were quick to denounce the US move, however, with Foreign Secretary Masud Bin Momen summoning the US ambassador "to convey Dhaka's discontent" over the decision.

He "regretted that the US decided to undermine an agency of the government that had been on the forefront of combating terrorism, drug trafficking and other heinous transnational crimes that were considered to be shared priorities with successive US administrations," the foreign ministry said in a statement.

"If bringing down a criminal under the law is a violation of human rights, then we have no objection to violating this human rights in the interest of the country," he said.