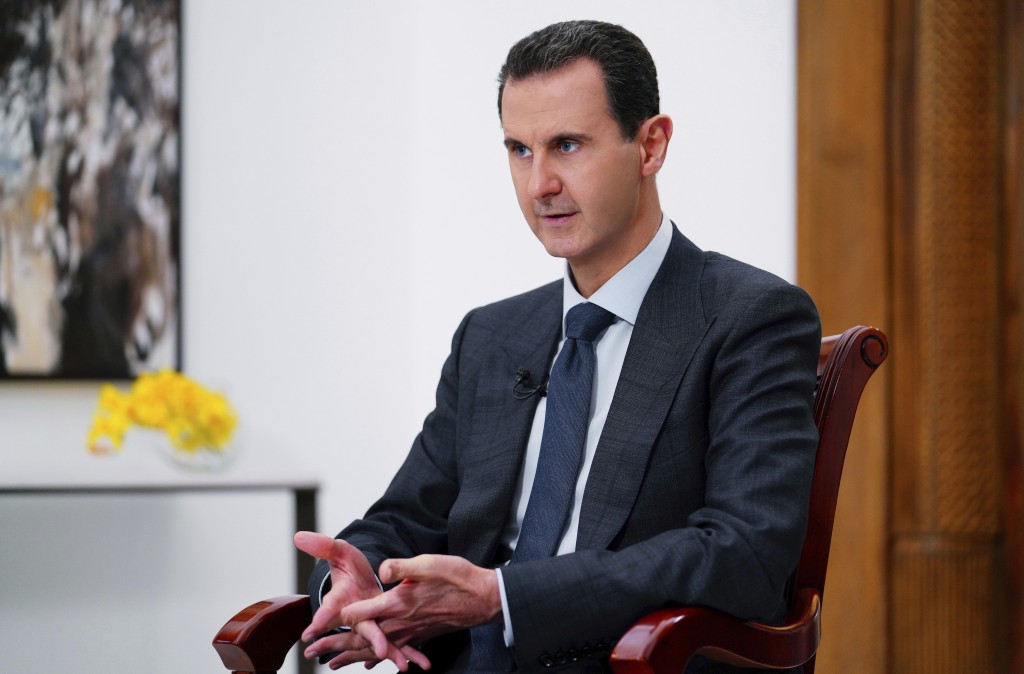 In an interview with Israeli Army Radio, Elazar Stern would not directly comment on the report in the Washington Post that said that Israel struck Syria on two occasions — once this year and once last year — in a bid to block attempts to rebuild its chemical weapons stockpile. But Stern, a retired military general, hinted that Israel could not accept such weapons in the hands of its enemy to the north.

“We have a neighbor who has already proved that it doesn’t hesitate to use chemical weapons even against its own people,” he said. “(Syrian President Bashar) Assad must not have chemical weapons."

Military affairs commentators in Israel, who often are briefed by top defense officials, said the timing of the report was not a coincidence and comes as negotiators are meeting with Iran in Vienna to try to revive a 2015 nuclear deal.

Iran has close ties with Syria and has sent fighters and advisers to back the forces of Syrian President Bashar Assad in his country's decade-long civil war.

“It was a signal to all of the actors, Iran and the United States, that Israel is serious about acting against the development of non-conventional weapons by its enemies,” wrote Yossi Yehoshua in the Yediot Ahronot daily.

Israel has long opposed the 2015 nuclear deal between global powers and Iran, which granted Iran relief from economic sanctions in exchange for curbs on its nuclear program.

Instead, it has called for an accord with even tighter safeguards on Iran's nuclear program and that addresses other Iranian military behavior, such as its missile program and support for anti-Israel militant groups like Lebanon’s Hezbollah, which also has sent fighters to Syria. Israel also supports a “credible” military threat against Iran as leverage.

Israel believes Iran is trying to develop a nuclear weapon — a charge Iran denies. U.S. intelligence agencies and the IAEA have said Iran ran an organized nuclear weapons program until 2003.

Israel has acknowledged carrying out scores of airstrikes in Syria — almost all of them aimed at Iranian forces or its proxies. Attacks on Syrian targets are rare.

One of the raids cited by the Washington Post, on June 8, was reported by Syrian state media as an Israeli aerial attack near the Syrian capital Damascus and in the central province of Homs, that prompted a response from Syrian national air defenses.

There was no mention in official media of what was targeted in the strikes, although loud explosions were heard in Damascus.

The Syrian government reported the strike to the Organization for the Prohibition of Chemical Weapons in a July 9 letter. In it, Syria acknowledged that two chlorine cylinders were destroyed in an airstrike and had been moved there from Douma, the central Syrian town where the global chemical weapons watchdog agency has said chlorine was used as a weapon against civilians in 2018.

Although the agency did not assign blame for the attack, which killed some 40 people, the U.S., Britain and France blamed Syria and launched punitive airstrikes.

The Syrian Archive, a Berlin-based group that documents human rights violations in Syria with a focus on chemical weapons, said one of the sites has reportedly been described as a chemical production center in the southern region. It said another in central Syria was described by former Syrian military officials, who joined the opposition, as a place where chemicals are stored and where work on developing missiles warheads as well.

The Syrian Observatory for Human Rights, a British-based group that closely monitors the war in Syria, has said the targeted sites included a branch of the military-linked Scientific Studies and Research Center northwest of Homs, in addition to an ammunition depot likely to belong to Hezbollah, south of Homs. The strikes killed 11 soldiers, including a colonel it identified as Ayham Suleiman Ismail.

Unconfirmed reports published by pro-Assad media at the time identified Ismail as a leading chemist at the research center.

The center is a government agency described by the Syrians as a facility for the advancement of scientific research. But Syria watchers have long described it as an outfit for the development of chemical, biological and other weapons.

Israel is believed to have struck facilities associated with the SSRC on numerous occasions in the past.

Syria joined the Chemical Weapons Convention in September 2013, pressed by Russia after a deadly chemical weapons attack that the West blamed on Damascus.

By August 2014, the Assad government declared that the destruction of its chemical weapons was completed, but its initial declaration of chemical stockpiles and production sites to the OPCW has remained in dispute.

OPCW investigators have blamed at least three chemical attacks in 2017 on President Bashar Assad’s government. The agency last year suspended Syria's voting rights in the organization. Syria says it has complied with its commitments and wants to continue cooperation with the OPCW.