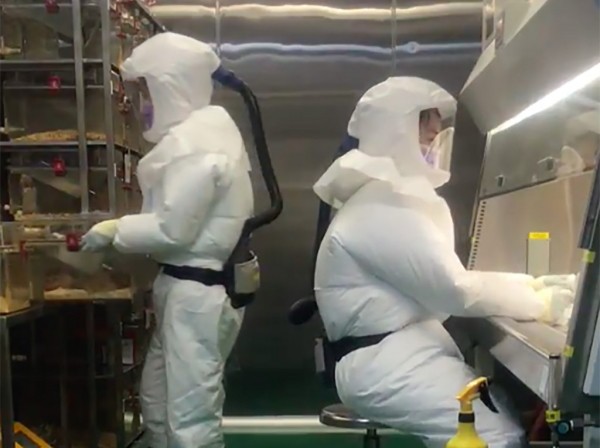 TAIPEI (Taiwan News) — The total number of contacts of a female research assistant who contracted the Delta variant of COVID inside a high safety level lab in Taipei has risen to 453.

On Saturday (Dec. 11), the Central Epidemic Command Center (CECC) verified that an assistant researcher, case No. 16,816, had contracted COVID while working in a P3 (Biosafety Level-3) facility. The laboratory is located inside Academia Sinica's Genomics Research Center (GRC), which is situated in Taipei's Nangang District.

That day, 105 people had been listed as contacts of the researcher and were told to enter quarantine. By Tuesday (Dec. 14), the CECC announced that the number of contacts had risen to 453, including 110 who have entered quarantine, 36 undertaking self-health management, and 307 observing self-health monitoring.

Of these contacts, 451 have tested negative for COVID. The remaining two are still awaiting the results of their COVID tests.

CECC head Chen Shih-chung (陳時中) on Saturday confirmed the entire genomic sequence of the Delta variant contracted by the researcher matched that of the samples she had been experimenting on at Academia Sinica's GRC. The genomic sequence of the version of Delta contracted by the researcher differs from any other domestic cases reported in local outbreaks from June to September.

Chen said tests on nearly 700 people in the neighborhood of the research institution have all come back negative for COVID, indicating the virus has not yet spread to the local community. These factors led the CECC to conclude that case No. 16,816 is a laboratory-acquired infection (LAI).

Director of the Academic Affairs and Instrument Service at Academia Sinica, Chen Chien-Chang (陳建璋), said that according to an initial investigation, case No. 16,816 had been bitten by lab mice twice, with the first incident occurring in October and the second in November. In the second incident, she was bitten by a mouse infected with the Alpha strain.

That same day, there were two other workers conducting research on mice infected with the original strain first seen in Wuhan and the Delta variant. Officials are not ruling out the possibility that an error occurred during the handling of the mice and that cross-infection took place inside the lab.

An inspection of the lab found that some tables, doorknobs, and other surfaces had tested positive for COVID, while all tests on facilities outside the lab were negative. Chen said it was possible the scientist had contracted the virus from the lab environment rather than the mouse bite.