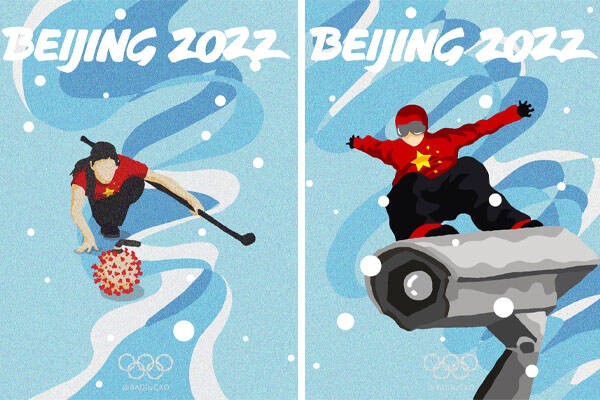 TAIPEI (Taiwan News) — An audio recording of a conversation between an Australian activist and a billboard company employee reveals that they have imposed a nationwide ban on his anti-Chinese Communist Party (CCP) advertisements.

In recent days, Drew Pavlou, a human rights activist running for Senate, coordinated with Chinese dissident artist Badiucao (巴丢草) on designing a series of advertisements protesting the Beijing Winter Olympics to be posted on local billboards in Brisbane, Australia. However, Pavlou found that he had been suddenly rejected by Australian billboard companies.

On Tuesday (Dec. 14), Pavlou posted audio to Facebook and Twitter of a conversation with a billboard company representative. In the audio, the representative said the managing director of Goa, a major billboard maker in Queensland, held a meeting with the managing directors of all billboard companies, and they concluded that the 3,000 Australian dollars that Pavlou wanted to spend on the ads were not worth the risk that the industry would incur from angering the Chinese government.

The representative said that most of the industry's supplies to make the billboards, including the steel, come from China. He alleged that the managing director of Goa contacted Brad Bishopp, the CEO of Bishopp Outdoor Advertising, who expressed concern for the industry if they ran the "anti-China messaging."

He pointed out that these executives frequently travel to China to purchase billboards and other supplies. They fear that if news of the signs reached China, it would have serious implications for their supplies of billboard components.

Secondly, the representative informed Pavlou that the companies are worried that posting such ads could generate a cybersecurity risk as Chinese hackers would presumably try to punish the firms for their anti-CCP messaging. The firms felt that the costs could be incurred by cyberattacks on their computer systems.

The man described the executives as being "all in cahoots" and sitting on the board of the Outdoor Media Association (OMA). He said the priority of the executives is to avoid any Australian government restrictions on their advertising because they are currently only self-regulated, while ironically restricting themselves in terms of any messaging potentially deemed offensive to Beijing.

When Pavlou asked if this meant that he could not post any ads that would be critical of the CCP in the city of Brisbane, the man confirmed this was the case, saying, "You won't be able to book any billboards with any company in Australia with anti-Chinese messaging." Pavlou clarified that his ads are not anti-China but rather anti-CCP, and the man acknowledged at it was the CCP component that was the issue.

The company rep said that he had broached the idea of an ad that just focused on protesting the Winter Olympics and not directly targeting the CCP, but he said that Bishopp completely rejected the idea. Pavlou pointed out that the U.S., U.K., and Australia are all carrying out diplomatic boycotts of the Winter Games, but the man said that the billboard companies believe it's "too great a risk" to anger Beijing.

1/2 - BREAKING: Please listen to this shocking phone call confirming ALL billboard companies in Australia have blacklisted my Senate campaign for fear of Chinese economic retaliation, cyber attacks. No billboard company in Australia will show @badiucao's art criticising the CCP pic.twitter.com/1isfcaBUye

2/2 -Drew: we can post nothing on a billboard in Brisbane that’s critical of the Chinese Communist Party?

Rep: In the end, correct. You won’t be able, you can mark my words there, you won’t be able to book ANY billboards with ANY company in Australia with anti-Chinese messaging. pic.twitter.com/toYGYpbnFW