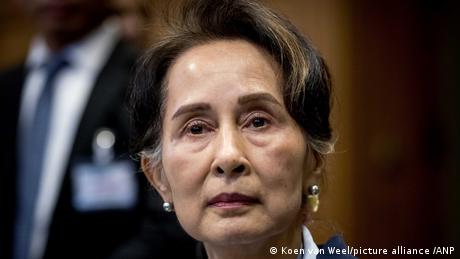 After the United States, Britain and Canada last Friday announced additional sanctions on Myanmar's military junta, pressure is growing on the European Union to follow suit.

The vice president of the European Parliament called earlier for additional measures against the junta and its associated businesses, which took power illegally in a coup on February 1. However, EU spokespersons contacted by DW declined to comment on the matter.

The latest sanctions from several other Western nations came days after Aung San Suu Kyi, the deposed state counsellor, was sentenced last week to two years in prison on charges of incitement and breaking COVID-19 rules. Additional accusations against the Nobel Peace Prize winner could lead to her imprisonment for up to 100 years.

Myanmar was ruled as a military dictatorship from 1962 until its democratic transition in the early 2010s, although the military maintained a lot of its political power even after Suu Kyi's party took office in 2016.

Suu Kyi's sentencing "is just the latest in a long list of reasons why the EU should impose more targeted sanctions on the military," said Mark Farmaner, director of the action group Burma Campaign UK.

"It's been almost six months since the EU imposed any new sanctions, which will be encouraging the military to believe the EU won't take any further action,” Farmaner told DW.

After the February 1 coup, it took Brussels several weeks before it imposed sanctions on the generals and their military-run businesses in the country's capital Naypyidaw. A third round of sanctions came into effect in June.

The coup sparked a national revolt with anti-junta protesters forming a Civil Disobedience Movement that has refused to cease its demonstrations despite an estimated 1,300 civilians having been killed by security forces since the coup, according to the Assistance Association for Political Prisoners, a monitoring group.

The government-in-exile, the National Unity Government, called on civilians in September to form militias and fight a "people's defensive war" against the junta.

Meanwhile, decades-old civil wars in the country's restive ethnic-minority provinces have escalated into open conflict, having some obervers worried that Myanmar could end up a "failed state."

Kristina Kironska, a Bratislava-based academic who specializes in Myanmar, said the EU has much more leverage that it could use to weaken the military and support the Myanmar people. However, the EU is "failing to use this leverage," she said.

"It is disappointing because, at first, it appeared that the EU had learned from its past mistakes in imposing sanctions on Myanmar, when [previously] one-off rounds of sanctions were introduced only every few years after an atrocity was committed,” Kironska told DW.

No word yet on new measures

So far, the EU has not yet said whether it was considering a fourth round of sanctions against Myanmar's generals.

"The European Union strongly condemns this politically motivated verdict, which constitutes another major setback for democracy in Myanmar since the military coup," EU foreign policy chief Josep Borrell said in a statement early last week, referring to the sentencing of Suu Kyi.

He made no mention of possible new sanctions during a separate speech last Friday to mark Human Rights Day.

EU spokesperson Peter Stano would not be drawn on the question of further sanctions. It is for Borrell or EU member states to propose additional measures, he said, and then for the European Council to adopt them.

However, pressure is growing on Brussels to do more, and several European Commission officials, who have requested anonymity, said that limited discussions have been held over possible new sanctions.

She added that the EU should also look at extending sanctions to include the Myanmar Oil and Gas Company, reportedly the junta's largest single source of foreign currency income.

On top of this, Hautala called for greater enforcement of existing EU sanctions. The Environmental Investigation Agency reported in September that EU imports of illegally-logged teak from Myanmar have continued, notably to Italy, in violation of the EU Timber Regulation.

The Myanmar Timber Enterprise, a state-run organization that controls most timber exports, is also on the EU's sanctions list. "The EU cannot become a hot spot for illegal timber that profits the military junta," Hautala said.

Opinions in Brussels are also diverging over whether it's wise to continue trusting the Association of Southeast Asian Nations (ASEAN) to mediate peace talks with Myanmar's junta leaders.

ASEAN was criticized after Myanmar's generals broke almost all of the conditions of a "Five-Point Consensus," which the generals and the regional bloc agreed on earlier in the year. The consensus had called for an immediate cessation of violence in Myanmar and the provision of humanitarian assistance, among other measures.

ASEAN was, however, able to win back some trust after disinviting the junta leader, Min Aung Hlaing, from its virtual summit in October.

But that seemingly hard-nosed turn from ASEAN appears to be over after the chairmanship of the bloc changed hands.

Hun Sen, the long-serving prime minister of Cambodia, which recently took on the rotating ASEAN chair for 2022, said last week that he will visit Naypyidaw in January to meet with Hlaing. Analysts believe that this visit will serve to legitimize the junta.

"The EU is waking up to the fact that the ASEAN-led process won't go anywhere and that they have to be more proactive instead of hiding behind ASEAN," said Farmaner, of Burma Campaign UK.

Some EU officials maintain that nothing has changed, however. Borrell said last week that he still believes in the ASEAN-led process, while Stano, the EU spokesperson, said the EU gives its "full support to the ongoing efforts by ASEAN and the ASEAN Chair's Special Envoy.”

Hautala asserted that ASEAN could have played a key role in resolving the situation peacefully "if it weren't hindered by authoritarian governments in countries like Cambodia and Thailand that seek to protect the Myanmar military junta."

"It is a great disappointment that we cannot rely on the ASEAN-led response," Hautala concluded.