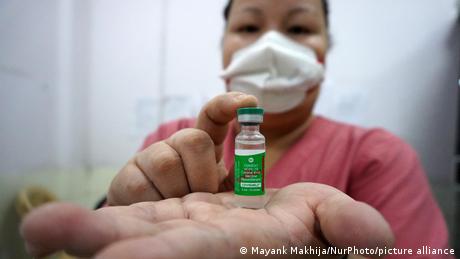 India's largest vaccine maker is reducing its production of the COVID-19 vaccine, as the country now has more doses than it needs to fully vaccinate the eligible population.

As of Monday, nearly 816 million of the country's eligible adult population had received at least one dose of the vaccine, while 512 million were fully vaccinated, according to health ministry figures.

The NTAGI provides the government with guidance on vaccinations, following scientific reviews of the effects of immunization policy and programs.

The country's largest vaccine manufacturer, the Serum Institute of India (SII), announced that it would reduce the production of Covishield, the primary vaccine in India, by at least 50% starting from this week, citing a lack of orders from the Indian government.

The Covishield vaccine accounts for nearly 90% of the 1.33 billion doses administered in India so far. India's other major vaccines include the the Hyderabad-based Bharat Biotech's Covaxin, and Russia's Sputnik-V.

In a television interview last week, Adar Poonawalla, SII's CEO, said the "supply is more than the demand for Covishield," and that the company has to dial down its production. "We will complete our existing orders to the government by next week," he said.

He added that the institute had 500 million doses of Covishield, half of which was already finished, with the other half able to filled and finished within two months.

Officials involved with India's COVID task force told DW that their priority was, however, to vaccinate the entire adult population before handing out third booster doses, for which demand has grown in recent weeks. The government also has yet to determine when people under 18 years will be vaccinated.

Experts including the Association of Healthcare Providers (AHPI), a body that represents 12,000 small and medium hospitals, are now urging the government to allow eligible adults to get a booster dose on a voluntary basis.

The AHPI has also said that the surplus stock of vaccines could be effectively used for this purpose. The private healthcare sector, which now has millions of unsold COVID vaccine doses, has started offering its stocks at heavily discounted rates to bulk buyers.

However, the National Expert Group on Vaccine Administration for COVID-19 and the NTAGI are still deliberating over whether a booster dose is necessary or not.

"There is a predominant feeling that when the booster is administered, it should be of a vaccine based on a platform different from that of the first two doses. I can understand SII's anxieties but a final decision has not yet been made," a top government official who wished to remain anonymous told DW.

Earlier this month, the SII requested that the Drugs Controller General of India authorize Covishield as a booster dose, citing the emergence of new coronavirus variants like omicron, and an adequate stock of vaccines to tackle that growing concern.

"We have not received any response. But there are ample vaccines in our stocks," an SII official told DW.

However, many health experts believe that mRNA vaccines, following two doses of Covaxin or Covishield, would be more effective boosters. Instead, the SII could focus on distributing its doses through COVAX, the global vaccine-sharing network, said Guatam Menon, a physics and biology professor at Ashoka University.

Time 'to go all-out' on COVAX

"This is actually the time for us to go all-out on our COVAX obligations, to ensure that those lower and middle-income countries with a vaccine gap can access them as soon as possible. This would be in consonance with our international obligations as well as our moral responsibility," Menon told DW.

The World Health Organization has expressed concerns that rich countries startled by the emergence of the omicron variant could begin hoarding vaccines again and strain the global supply, further complicating efforts to stamp out the pandemic.

For example, just 7.5% of people in African countries have been vaccinated so far.

The SII has since said that it has resumed exports to COVAX for distribution to low and middle-income countries.

Meanwhile, the Indian government is considering insitute's Covovax vaccine, as a possible third dose among five other booster candidates. The SII has already received emergency use authorization for the vaccine in Indonesia and the Philippines.

"SII also produces other vaccines such as Covovax," Vineeta Bal, a scientist with the National Institute of Immunology, told DW. "They could increase Covovax production and decrease Covishield production, because Covovax can be used in some age groups below 18 years old," she added.