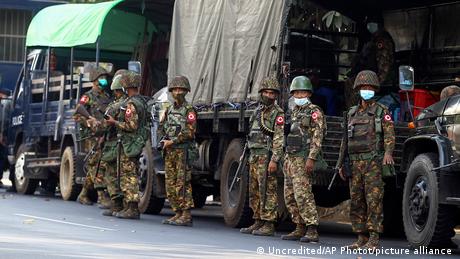 HRW director Kenneth Roth on Twitter accused the military of "blocking desperately needed aid from reaching millions of displaced people and others at risk."

Roth went on to say the junta were "blocking access roads and aid convoys, destroying supplies and attacking aid workers.”

Why is the junta blocking aid?

The New York based NGO said that Myanmar's military leadership were purposefully frustrating the aid process as a form of retribution over international criticism of its rule.

In a report released on Monday, HRW said: "The generals are callously denying life saving assistance to people affected by conflict since the military takeover, seemingly as a form of punishment."

"Myanmar's junta has worsened a self-created humanitarian catastrophe by displacing hundreds of thousands of people and then blocking the critical support they need to survive," said HRW Asia Researcher Shayna Bauchner.

HRW said that the military coup in February triggered a collapse of infrastructure and a currency crisis. Supply chains have been severely affected, leading to shortages in food and medicine.

HRW that the military's violent crackdown on protests following the coup has displaced more than 284,000 people.

The UN estimated the number of people in need of aid will rise from 1 million to 14,4 million by 2022. Included in that number is 5 million children.

HRW said to date the international response to the humanitarian situation in Myanmar has been inadequate. Its understood that the UN and aid agencies had only received 18% of the $109-million (€ 96 million) that had been requested to help deal with what it calls the "post-coup humanitarian emergency."

On Friday,the US, Britain and Canada slapped sanctions on Myanmar.

The measures came days after Aung San Suu Kyi, the deposed state counsellor, was sentenced to two years in prison on charges of incitement and breaking COVID-19 rules.

Additional accusations against the Nobel Peace Prize winner could lead to her imprisonment for up to 100 years.

This report was written with material from DPA