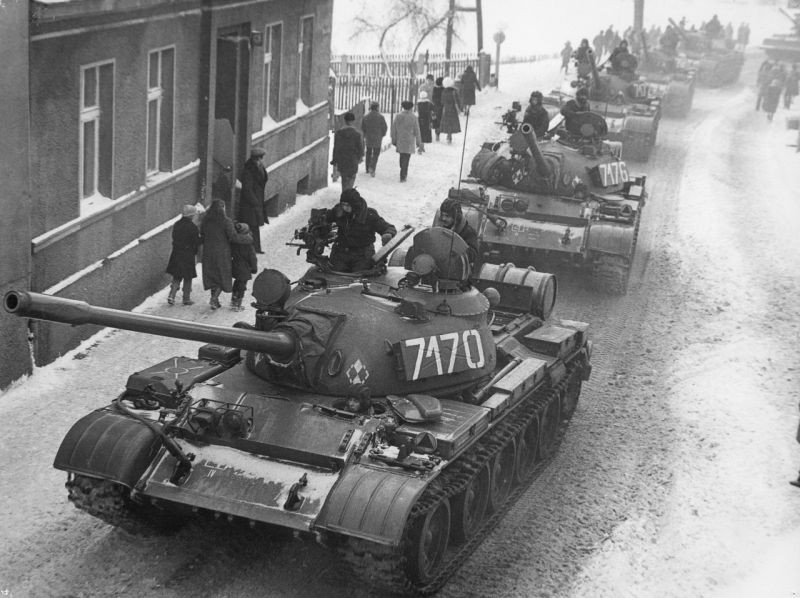 This Monday (Dec. 13), marks 40 years since martial law was imposed in Poland by the then-ruling communist regime.

There was a loud pounding on doors, sometimes forced entry, threats, and violence. There was usually just a moment to get dressed, followed by brutal separation from the family and uncertainty about the future.

This is how over 3,000 internees remembered the nights of Dec. 12-13, 1981, when martial law was imposed in Poland. Leading activists of the Solidarity independent trade union were detained, but also people less involved in the democratic opposition.

Those arrested by the police and security forces that night included Antoni Heda, living in the village of Kanie, near Warsaw. The distinguished commander during the German occupation was imprisoned several times in the 1940s. Firstly, by the Soviets, then the Germans, and finally by Polish-born communists.

Shortly after his 60th birthday, he was once again considered to be a threat to “national security and public order” by the communist regime. He was placed in the Bialoleka detention facility in Warsaw.

Another center, in Leczyca, held a doctor from Lodz, Marek Edelman, one of the leaders of the heroic 1943 uprising in the Warsaw ghetto.

What happened in Poland that frosty December and in the following months is sometimes referred to as a war between Poland and General Wojciech Jaruzelski. He was the head of the hierarchy in the communist government who declared war against his own nation.

He ordered tanks to suppress the nation’s demand for independence, symbolized by the Solidarity movement, supported by millions of Polish people. It was a period of great terror and lawlessness.

The government that claimed to represent the people shot workers, just like in 1956 and 1970. The so-called pacification of the Wujek mine strike in Katowice on Dec. 16, 1981, led to at least nine fatalities.

The number of internees across Poland approached 10,000 people. Prisons were full.

Ewa Kubasiewicz from Gdynia, a striker, and co-author of the leaflet calling for resistance, was sentenced to 10 years imprisonment. Draconian sentences were also administered for offenses such as painting “Down with communism” graffiti on walls.

In that difficult period, all the world was talking about Poland. Communist regimes led by the Soviet Union backed General Jaruzelski, though the West clearly sympathized with the persecuted.

Marches and assertions of solidarity with the Poles took place in Paris, Munich, Rome, and even in distant Melbourne, in Australia. An unprecedented wave of selfless humanitarian aid for Poland started to arrive.

Parcels of food, medication, and other donations flew into Poland from West Germany, France, and Sweden. Beneficiaries, including families of the repressed, could enjoy a moment of happiness in those dark times.

Pope John Paul II also expressed solidarity with his persecuted compatriots during those sad months. “The strength and solemnity of power is expressed in ... dialogue, not in the use of violence,” he said, appealing to Jaruzelski’s government.

He asked for the “rights of every human being and citizen” to be respected and denounced the effects of the “unfortunate martial law.” On that Christmas Eve, the papal apartment window, visible from St. Peter’s Square in the Vatican, featured a candle as a beacon of solidarity with the suffering nation.

The same gesture was taken up by Ronald Reagan in the White House. The U.S. president called for his compatriots to also light candles in their windows. “We the people of the free world stand as one with our Polish brothers and sisters,” he said. “Their cause is ours, and our prayers and hopes go out to them this Christmas.”

These gestures by Pope John Paul II and Reagan are referred to in the campaign “Light the Light of Freedom” by the Institute of National Remembrance (IPN), the institution I have the honor of managing.

On each Dec. 13, we encourage Poles, and people all over the world, to light a candle in their windows, or virtually online, to commemorate the victims of martial law. This campaign will be continued year after year.

Another action that resonated 40 years ago was the TV program “Let Poland be Poland,” broadcast on Jan. 31, 1982, and watched by almost 200 million viewers across the world. It referred to the Day of Solidarity with Poland announced by the U.S. administration.

Aside from politicians, it featured famous artists, including Paul McCartney, Kirk Douglas, and Frank Sinatra. The latter even sang in Polish.

“Let Poland be Poland” was a matter of interest for the communist secret service in Poland. A videotape with the abbreviated version broadcast on West German TV is now kept in the IPN Archive in Warsaw, as are other materials taken from the former security service.

We also have hundreds of volumes of martial law files that are made available to scientists and journalists, both from Poland and abroad. Owing to this heritage, we are not restricted to the sugared memoirs of Jaruzelski, who tried to present the martial law years later as a “lesser evil,” in an attempt to defend the country against the threat of Soviet intervention.

After 1989, many Poles lived with a sense of transformational injustice. Those who opposed the communist regime often paid a high price for doing so, including imprisonment, broken careers, sometimes emigration, and destroyed private lives.

Their oppressors from those times have lived undisturbed lives in free Poland. In 2014, Jaruzelski was buried with honors at the Military Cemetery in Warsaw.

However, prosecutors from the Institute of National Remembrance are applying for a waiver of the immunities applied to those judges and prosecutors who prosecuted members of the opposition during martial law and in the years that followed. We cannot take back the past, but striving to restore justice is the duty of a democratic state governed by the rule of law.

Text first published in the monthly Wszystko Co Najwazniejsze (Poland) as part of a historical education project with the Institute of National Remembrance.

The Institute of National Remembrance researches and promotes modern Polish history and investigates crimes committed from Nov. 8, 1917, throughout the Second World War and the communist period, to July 31, 1990.