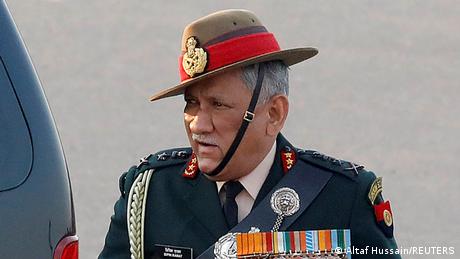 The Indian Air Force said Wednesday that 13 people, including India's defense chief General Bipin Rawat, died in a helicopter crash in the south of the country.

"With deep regret, it has now been ascertained that Gen Bipin Rawat, Mrs. Madhulika Rawat and 11 other persons on board have died in the unfortunate accident," the Indian Air Force said on Twitter.

What we know about the crash

Television images showed the helicopter in flames as local residents tried to douse it.

The 63-year-old chief of defense staff was traveling in a Russian-made Mi-17V5 chopper that "met with an accident today near Coonoor, Tamil Nadu, the Indian Air Force said.

"An Inquiry has been ordered to ascertain the cause of the accident," it added.

Rawat and his wife, along with some officers, were on board the helicopter headed to the army's defense services college, a senior army officer said.

According to the Indian Air Force, one of the military officers who were on board the chopper is receiving treatment for his injuries in a hospital.

Earlier media reports had said there were a total of 14 passengers on the helicopter.

Who was Bipin Rawat?

The general held India's highest military rank — the chief of defense staff (CDS). He was the first to hold the position, which the Indian government established in 2019.

Rawat was seen as close to Prime Minister Narendra Modi. Several generations of his family served in the Indian armed forces. He had commanded forces in Indian-administered Kashmir and along the Line of Actual Control bordering China.

"As India's first CDS, Gen Rawat worked on diverse aspects relating to our armed forces including defence reforms. He brought with him a rich experience of serving in the Army. India will never forget his exceptional service," Modi said on Twitter.

Qamar Javed Bajwa, Pakistan's chief of the army staff, expressed his condolences on the "tragic death" of Rawat and his wife, the Pakistani armed forces spokesperson said on Twitter.

Rawat triggered multiple controversies over the years. In 2017, he awarded a gallantry medal to an army officer who had tied a civilian to the front of his jeep in Kashmir, where rebels are fighting Indian rule.

Last month, Rawat said that Kashmir residents were offering to "lynch terrorists themselves" — despite the illegality of lynchings under Indian law — and that it was a "very positive sign."

Rawat himself had earlier survived a helicopter crash in 2015 in the northeastern state of Nagaland.

In 2019, an aircraft collided with another one during drills in the southern city of Bangalore, killing an Indian military pilot and injuring two others.

At least five members of the Indian Air Force died in 2017 after an M-17 helicopter crashed in the northeastern state of Arunachal Pradesh.

In 2015, 10 members of India's Border Security Force were killed when a paramilitary plane crashed in New Delhi.