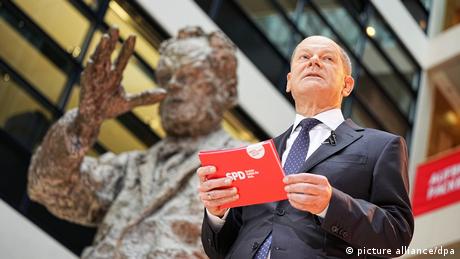 When Olaf Scholz takes his oath of office on Wednesday as Germany's ninth post-war chancellor, there will be no motorcade bearing him to the Bundestag with flag-waving jubilant crowds cheering him on, nor a famous local singer belting out the national anthem.

In a nutshell, the day's proceedings start with German Federal President Frank-Walter Steinmeier proposing to the Bundestag that Scholz be elected chancellor, based on the broad understanding that many back his appointment.

With the current Bundestag consisting of 736 people's representatives, Scholz will need to secure an absolute majority of 369 votes. This won't be an issue since the coalition he heads, consisting of the Social Democrats (SPD), the Greens and the Free Democrats (FDP), already has 416 votes between them.

Then Scholz will head to the Bellevue Palace, the official presidential residence, to be officially appointed and receive his appointment papers, and then return to the Bundestag where he'll be sworn in.

After which, he'll likely address the Bundestag, spelling out the plans the new government has for the country for the next four years.

Perhaps the only tangible reminders of his swearing-in during the day might be the bouquets of flowers that Scholz will receive as the new chancellor from the various party representatives in the Bundestag.

So far, the only pre-swearing-in ripples in the German press has been the fact that Scholz will omit the final line of the traditional oath: "... so help me God." But he had already done so during his oaths as finance minister and mayor of Hamburg, so it's not a real issue.

For instance, Bolivia's first-ever indigenous president, Evo Morales, participated in a traditional ceremony at a sacred pre-Incan site a day before his inauguration in 2006. Barefoot and dressed as a sun priest, he was given a baton, encrusted with gold, silver and bronze, symbolizing his indigenous leadership.

In countries with nuclear arsenals, there's also the symbolic handing over of the nuclear codes. Examples include Russia, France and the United States — the country most associated with inauguration rituals and ceremonies.

International broadcasters descend upon Washington D.C. days before the event to dissect the minutiae on crowd numbers, the performers' diversity, the presidential address or who will wear what.

An appearance at a US presidential inauguration event can also prove to be a springboard to new opportunities, as young poet Amanda Gorman discovered after her star turn at the inauguration of President Joe Biden in January this year.

On par with prime ministers

Germany is a parliamentary democracy where the Federal President is the country's most senior representative, while power lies in the office of the Federal Chancellor.

"Chancellors don't have the same representational role as a US or French president. If you look at their political power and influence, it could be said that they are on par with prime ministers elsewhere," explains historian Barbara Stollberg-Rilinger.

Stollberg-Rilinger, who is rector of the Berlin Institute for Advanced Study, adds that Germany also has a different party system, with chancellors being elected differently compared to American or French presidents.

The historian, whose research focuses on the role of rituals, symbolic communication and ceremonies in early modern history, points out that swearing-in events in countries like France or the US still echo monarchic traditions: "In certain respects, the US inauguration reminds me of a pre-modern coronation ritual. We don't have this in Germany," Stollberg-Rilinger told DW.

Describing the swearing-in of a German chancellor as "matter-of-fact — and not magnificent at all," Stollberg-Rilinger adds that this is generally the case for most political actions in Germany today.

The most pertinent reason for this is related to German history, harking back to the mass rituals of the Nazi era.

"For me as a German, when I think of rituals, the first thing that comes to mind is the Nazi Parteitag [party rallies] in Nuremberg, where there were thousands of people marching in rows with torches," says the historian. "This is so dominant in German historical memory, and we don't want to have this anymore. This is the main reason why political rituals are so sober today."

She, however, doesn't discount the need for certain rituals in a democracy, pointing out that Germany does, for instance, commemorate Reunification Day or the Nazi Kristallnacht pogroms, where hundreds of Jews were killed and Jewish institutions were destroyed in November 1938.

"These are very modest, non-magnificent, calm but very important rituals of German memorial culture," says Stollberg-Rilinger. "But where inaugurations are concerned, there is the swearing-in, but that's it. The German population won't really notice it."

This lack of flamboyant ritual for a new government also reflects the fact that the German Constitution is quite recent. The Basic Law, adopted in 1949, outlines the procedures related to the election and swearing-in process of the chancellor.

"It is less a ritual and more a formal procedure. And it's so important that formal procedures work, and nobody denies the usual way of working," explains Stollberg-Rilinger, comparing how in the run-up to the last election in the US, former President Donald Trump said he would accept an election outcome only if he won, throwing into question established election regulations and the American constitution.

Germany's brand of compromise-oriented politics, based on coalition governments, also plays a role: "German society is by far not as divided as the US, which has to do with our party system. The fact that the German party system is more complex and the society is less polarized is one of the reasons why we don't need these huge rituals of unity — we can do without them," explains Stollberg-Rilinger.

She however adds that ceremonies alone cannot bridge political polarization: "The US society is so divided that no ritual can help."

But could things change in Germany? Will fireworks or a 21-gun salute ever accompany future swearing-in ceremonies?

In Stollberg-Rilinger's view, that's highly unlikely, especially in a country where fireworks are condemned as outdated because of their CO2 emissions, and where gun salutes evoke military connotations.

But, she adds, it all depends on how history unfolds: "If we get an authoritarian system as the tendency is in other European states like in Poland or Hungary, you never know. But I am quite confident that Germany, having this very special historical experience, will not change its sober ceremonies in the near future."