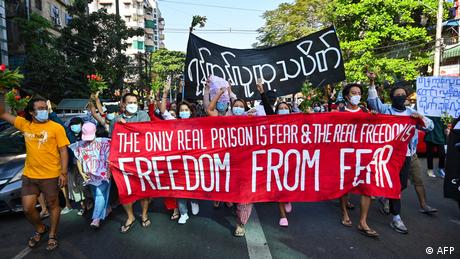 She was charged with incitement against the military junta and breaking coronavirus restrictions.

A Nobel Peace Prize laureate, Suu Kyi had been Myanmar's de facto head of government from 2015 to February 2021, when she was ousted in a military coup and put under house arrest.

Her imprisonment is being called a major blow to the future of democracy in the country, which is now facing a protracted struggle between the military and groups loyal to Suu Kyi's ousted democratically elected government.

Gil added that the military's use of oppression tactics to crack down on its opponents shows "how out of touch" the junta is.

Amnesty's deputy regional director for campaigns, Ming Yu Hah, said that Suu Kyi's sentence on "bogus charges" was "the latest example of the military's determination to eliminate all opposition and suffocate freedoms in Myanmar."

Ming warned that ongoing violence between the military and armed pro-democracy groups was setting up a "humanitarian crisis."

"Without a decisive, unified and swift international response this can and will get worse," Ming said in a press statement.

"It represents another step towards the dismantling of the rule of law and a further blatant violation of human rights in Myanmar," Borrell said in a statement, adding that the military's actions showed "complete contempt for the will of the people" in Myanmar.

"The people of Myanmar have overwhelmingly rejected the military coup and demonstrated their unwavering desire for a nation in which the rule of law, human rights and democratic processes are respected, protected, and upheld," Borrell said.

Aye Min Thant, a Myanmar journalist currently based in Bangkok, told DW that the ruling was likely to bolster the pro-democracy movementin the country.

"I don't think this verdict was a surprise to most people. I think people had planned to continue the resistance without having Aung San Suu Kyi as a leader," Aye added.

Myanmar's "National Unity Government" was created after the coup by democratically elected lawmakers and considers itself a government in exile.

Salai Maung Taing Sang, a spokesman for the exiled government better known as Dr Sasa, spoke of a "shameful day for the rule of law justice and accountability" in Myanmar.

"The brutal military junta has today confirmed that they see themselves as above the law," he said, calling for further sanctions on assets and businesses owned by the military.

UN human rights commissioner Michele Bachelet said Suu Kyi's conviction following a "sham trial" was an attempt by the junta to "instrumentalize the courts to remove all political opposition."

"These cases cannot provide a legal veneer to the illegitimacy of the coup and military rule," Bachelet said in a statement, adding that the verdict will only "deepen rejection of the coup."

"It will harden positions when what is needed is dialogue and a peaceful, political settlement of this crisis," she said.

A statement from the Association of Southeast Asian Nations (ASEAN) called the charges against Suu Kyi nothing more than "an excuse by the junta to justify their illegal power grab." In October, ASEAN did not invite junta leader, Min Aung Hlaing, to its annual leaders summit.

US calls for Suu Kyi's release

US Secretary of State Antony Blinken said on Monday that Suu Kyi's conviction was "unjust" and called for the leader's immediate release, also using the other commonly-employed name for the country and its former official name, often favored by Suu Kyi.

"The Burmese military regime's unjust conviction of Aung San Suu Kyi and the repression of other democratically elected officials are yet further affronts to democracy and justice in Burma," Blinken said in a statement.