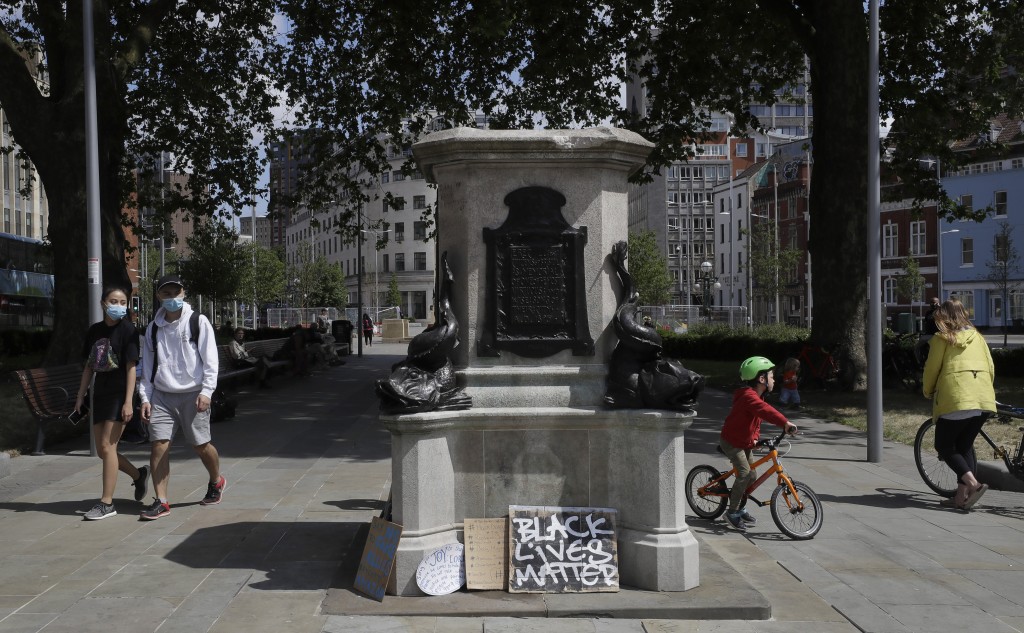 The governors of Colston’s School, which was set up in 1710 in Bristol, said Monday that the private school will be renamed next summer with current and former students, parents and staff all to have a say.

They said the events that took place during the protests in Bristol in June 2020, which saw the toppling of Colston's statue in the city, prompted renewed questions about keeping his name at locations across the city.

"What became clear is that the name Colston has become a symbol of the city’s extensive links to slavery and will forever be associated with the enslavement and deaths of African men, women and children," it said.

Colston, who was born in 1636 to a wealthy merchant family, became prominently involved in England’s sole official slaving company at the time, the Royal African Company, and Bristol was at the heart of it.

The company transported tens of thousands of Africans across the Atlantic Ocean, mainly to work the sugar plantations in the Caribbean and cultivate the tobacco fields that were burgeoning in the new colony of Virginia.

Bristol, as an international port, was at the center of the slave trade and benefited hugely financially — not just by shipbuilders and slavers, but also investors like Colston, who would buy a stake in the triangular slave voyage between England, West Africa and the Caribbean.

Colston gave a lot of money to local charities and that helps explain why his name has donned so many public buildings in the city, including educational and economic institutions. In November 2020, Colston’s Girls’ School in Bristol announced it would become Montpelier High School after a vote by current students and staff.

Colston has been a figure of huge controversy in Bristol for years. Residents of the city, which has a big community hailing from the Caribbean, are ashamed of what Colston represents.

That shame came to the fore during last year’s Black Lives Matter protests when his statue was pulled down and rolled into nearby Bristol Harbour. It was later recovered by Bristol City Council and placed in a museum.

Britain formally abolished the slave trade in 1807 but slavery itself was only formally outlawed in British territories in 1834. Overall, more than 12 million Africans are estimated to have been sent to the New World, of whom around 2 million are believed to have perished en route.

The decision by the school follows a survey, which received more than 2,500 responses, including 1,096 from the general public. Though more than 80% of the members of the public who took part said Colston's name should be retained, the school said the vast majority of responses from people with links to the school thought changing the name would mark a positive step.

While the school will no longer be named after one of Britain's most notorious slave traders, the governors said they didn't want to "erase the school’s history” and insisted that the slave trade and Colston's role in Bristol’s history will remain a key part of the school’s curriculum.

Across the world, the protests raised questions about many monuments and statues connected to people with links to slavery and racism.