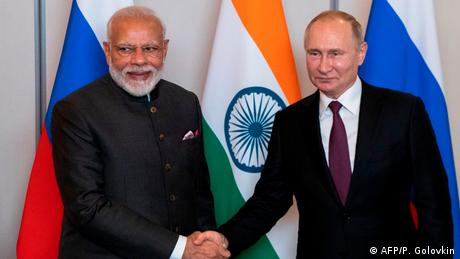 Russian President Vladimir Putin is set to arrive in New Delhi on Monday for his second overseas travel since the start of the coronavirus pandemic.

During his one-day visit, he will meet Indian Prime Minister Narendra Modi for talks that are likely to focus on bolstering military and energy ties.

Political and defense issues will be at the center of the annual summit, Indian foreign ministry spokesperson Arindam Bagchi said.

The two countries are expected to sign several agreements, particularly in trade and defense.

India and Russia are likely to sign a 10-year military-technical agreement that could help in the transfer of new technologies to India.

The India-Russia deals on the table

India is among the world's largest arms importers, accounting for nearly 10% of the global defense trade, according to the Stockholm International Peace Research Institute (SIPRI).

Moscow has long been the largest arms supplier of India, which is looking to modernize its armed forces.

One of the most high-profile contracts is for the Russian long-range S-400 ground-to-air missile defense system, which New Delhi considers to be critical in countering China.

The deal, worth $5 billion, was signed in 2018 and has been a major irritant in India-US ties.

The US has threatened sanctions under the Countering America's Adversaries Through Sanctions Act (CAATSA), which is aimed at reining in Russia.

New Delhi has been hoping to get a waiver from the sanctions but last week, the US state department said no decisions had been made on any waivers for India.

The two countries are also expected to finalize a deal for the manufacture of AK-203 assault rifles in India, which is keen to increase its domestic arms production.

India and Russia also held the inaugural 2+2 ministerial dialogue on Monday between the foreign and defense ministers of the two countries.

"We hope Russia will remain a major partner for India in these challenging circumstances."

Indian Foreign Minister S Jaishankar said the meeting would address the "emergence of multipolarity and rebalancing."

"We look at the consequence of over-centralized globalization. Long-standing challenges of terrorism, violent extremism remain among newer challenges," he said.

The history of India-Russia relations

Russia has traditionally shared close ties with India, which in recent years has drawn closer to the United States.

India largely depended on the former Soviet Union for military imports during the Cold War.

The relationship between the two sides has endured, with New Delhi calling it a "special and privileged strategic partnership".

"The friendship between India and Russia has stood the test of time," Modi told Putin at a virtual summit in September. "You have always been a great friend of India."