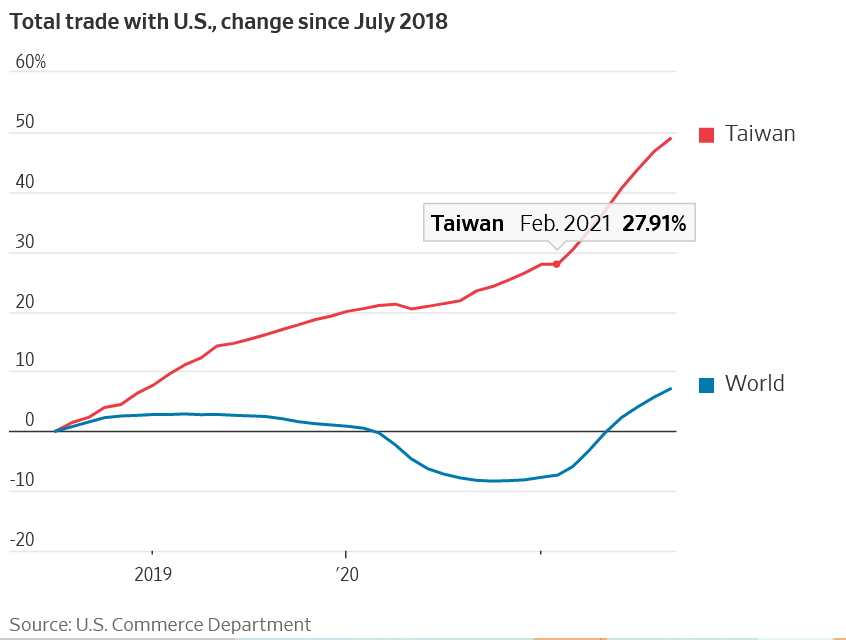 Taiwan’s exports in goods to the U.S. hit a whopping US$72 billion (NT$1.99 trillion) between September 2020 and September this year. That represents a 70% increase in sales to the world’s largest consumer market since 2017, the year before Trump’s tariffs first hit.

Taiwan is now in the top ten in global trade with the U.S., coming in at the number eight position, which is one place behind the U.K. and just ahead of Vietnam.

U.S. exports to Taiwan have climbed too, but only by half as much as Taiwan’s exports to America, up about 35% from pre-tariff levels to US$35 billion per year.

The WSJ reports that the tariffs, many of which are as high as 25% for electronics products, have driven Taiwanese manufacturers to return from China to avoid incurring the added costs. The Tsai Ing-wen (蔡英文) administration has also played a role in facilitating the move with assistance sourcing land, credit, and workers for the firms.

More than 70% of the companies moving back from China to Taiwan are electronics firms, according to one industry source cited by the WSJ.

The Biden administration has not dropped the Trump-era tariffs, which have coincided with a stronger economic as well as political relationship with Taiwan.