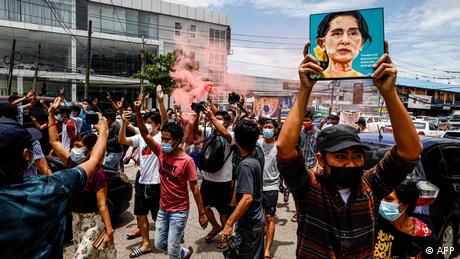 When the court in Myanmar's capital, Naypyitaw, hands down the first verdict in the trial against Nobel Peace Prize laureate and de facto head of government Aung San Suu Kyi on Monday, the military government will draw a legal line as well under the country's political awakening embodied by Suu Kyi.

To be clear: The expected verdict is not based on the rule of law — the court is merely enforcing what the military junta has decreed. Among other charges, Suu Kyi is on trial for incitement against the military and corruption.

Since entering politics in 1988, Suu Kyi — inspired by India's Mahatma Gandhi — has symbolized the pursuit of achieving political aims with nonviolent means.

She wanted to break the vicious cycle of confrontation and retaliation that characterizes the country and its endless civil war to this day. In 2015, it seemed the time had finally come. Suu Kyi and her party won a majority in largely free elections. Six years later, the bloody coup in early February has rendered those achievements null and void.

Return to nonviolence ruled out

The military junta wants to criminalize Suu Kyi. The trial is further evidence that the military rulers have no interest at all in reaching a political solution. Instead, to prop up their authoritarian rule, they resort to even more intimidation and violence. The facts speak for themselves: Approximately 1,300 civilians have been killed so far this year by security forces; opposition members have been abused and tortured — their haunting images posted on social media by soldiers.

What shouldn't be forgotten, however, is that a substantial segment of the opposition that used to rally behind Suu Kyi has also rejected a nonviolent approach. They argue that the junta's brutality leaves them with no other choice.

Bombings and arson attacks on military installations and police stations, on civil servants and also on infrastructure such as electricity and water supplies are commonplace. Supposed or actual informers are murdered and sometimes their children, too — tragic, but unavoidable collateral damage, says the opposition.

The military is waging an all-out, brutal war. International conventions are ignored, appeals for peace brushed aside. The military leadership's strategy is to completely destroy the enemy — and the opposition is making it easy for them. There's no intact chain of command to speak of, let alone a strategy to rally the many and disparate resistance cells around a common goal and a code of conduct. Making it even more complicated are the countless armed ethnic groups pursuing their own goals. As a result, the spiral of violence is increasing.

Many in the country today view Aung San Suu Kyi's ideas of pursuing nonviolent politics as anachronistic, even absurd.

This is all the more tragic because Suu Kyi's perseverance and doggedness in trying to achieve change through nonviolent means helped the country live through a decade of relative openness from 2011-2021.

In hindsight, it will be viewed as a missed opportunity — but it was the best one the country has had since it gained independence in 1948.

This article has been translated from the original German.