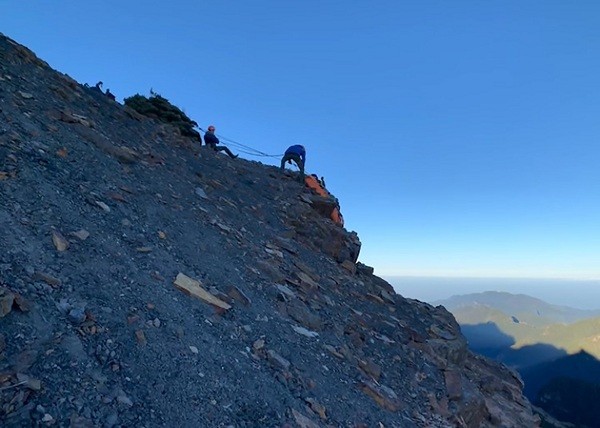 Hsinchu County Fire Bureau Second Group Commander Chen Jun-you (陳軍佑) said that the 32-year-old victim, surnamed Yen (顏), set out with two of her friends on Thursday to climb the Wuling Quadruple Mountains, which are four peaks situated close to Wuling Farm. When the group was descending the second cliff from the summit on Saturday, Yen lost her footing and fell.

After receiving calls for help, the bureau dispatched a helicopter and six firefighters to the Xinda Cabin, the mountain hut closest to the scene, Chen said. He added that rescuers found the victim at the bottom of a rocky valley around 4:10 p.m., but she had lost vital signs and was unresponsive.

According to Chen, the rescue was fraught with hardship due to the rugged terrain of the mountain.

It had become dark after 5 p.m., and rescuers worked in dim light for four hours to bring the victim to near the point she fell from, laying her body there for the night before they returned to the mountain hut.

On Sunday morning, rescuers set out from the mountain hut after 4 a.m., bringing Yen’s body up to the summit of Mt. Pintian. They had to be very attentive during their climb, as icy patches and rockfalls imperiled the route. From the summit, Yen’s remains were flown out by helicopter.

According to Chen, the steep cliffs of Mt. Pintian have treacherous sections, and this was the second fatal accident on the same cliff this year. He urged hikers to avoid this stretch and suggested the authorities improve safety conditions on the cliffs despite the presence of ropes already.