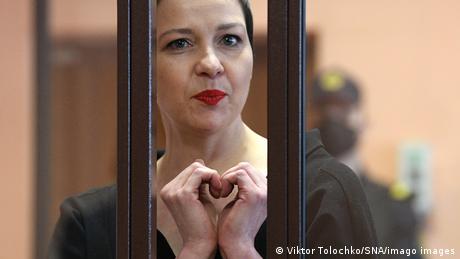 Leading Belarus opposition figure Maria Kolesnikova has been held behind bars for over a year in a Minsk penitentiary.

In 2020, Kolesnikova coordinated Viktor Babariko's campaign in the run-up to Belarus' presidential election. When Babariko, a prominent banker, was arrested on money-laundering charges, Kolesnikova became a key figure in the opposition's Coordination Council.

In August 2020, the group backed mass demonstrations across the country when it was announced that incumbent leader Alexander Lukashenko had been reelected as president for a sixth term, in a vote that the opposition and the West denounced as a sham. Many countries have refused to accept the election result.

Kolesnikova — a professional flutist who spent years working as a cultural manager in the southern German city of Stuttgart — soon rose to become one of the country's most prominent women dissidents. In September 2020, Belarus authorities attempted to force her into exile. She would not budge, however, and was arrested.

One year later, Kolesnikova and lawyer, Maxim Znak, another leading member of the Coordination Council, were tried for "inciting action aimed at harming national security" and "extremism." They were handed jail terms of 11 and 10 years, respectively.

International observers have called the trial a farce, and Germany has repeatedly demanded Kolesnikova's release. She will appeal the verdict on December 24.

Life behind bars taking its toll

DW was able to send Kolesnikova a range of questions concerning her trial, life behind bars and her expectations. She told DW that life in custody meant being deprived of "everything: air, the sun, my flute, letters, conversations and a shower." But, she added, "knowing what you live for means that does not matter."

While her mail correspondence has been restricted, she nevertheless feels "the care and love of people in Belarus and the whole world." That, she said, gives her "colossal support and energy."

German singer-songwriter Wolf Biermann — once a prominent East German dissident — and Green politician Claudia Roth have been campaigning for her release.

Kolesnikova called the jail terms handed down to her and Znak "absurd, because neither of us are guilty." She said it was "only one person who seized state power," and has refused to ask for a pardon, saying "that is out of the question." How, she wrote, is she supposed to confess to something she has not done?

Together with Sviatlana Tsikhanouskaya and Veronika Tsepkalo, Kolesnikova makes up a trio of prominent dissident woman who have come to represent the Belarus opposition movement. Tsikhanouskaya and Tsepkalo have both been forced into exile, with Tsikhanouskaya recently saying she could work more effectively from abroad; a return to Belarus could land her in jail, too.

Despite imprisonment, Kolesnikova told DW she does "not regret" remaining in the country. She said the "jails are crowded with honest, courageous Belarusians, who waste no time thinking about giving up, despite the phenomenal pressure [they are under]." She added that "it is an honor to join my people on this journey toward peace and change; everyone plays a [unique] role in this story."

Kolesnikova wrote that she has plenty of plans for when she gets out of jail. "I have many ideas for music and arts projects; one of them is transforming the remand center into a cultural hub." She also intends to set up a "center for resocializing and rehabilitating women who have been imprisoned."

'A matter of time' before Lukashenko loses power

DW also asked Kolesnikova about a new constitutional draft proposed by Lukashenko, as well as a recently signed deal between Belarus and Russia. She wrote that "nobody has seen the new conditional draft, or the 28 union state programs [road maps that are intended to bind the two countries more closely together]."

She also wrote that she finds it hard to believe civil society and the media are being "destroyed" in the country, while at the same time effort is being made to "democratize" the constitution and "get away from authoritarianism."

She also urged all Belarusians in exile not to forget about their fellow compatriots at home. "I admire all those who were forced to emigrate and still keep fighting for Belarus; everyone is putting in their share working toward a common goal," she said.

"It is important not to get detached from reality, and to realize that the situation is rather serious and that it will take a while until a solution is reached," she added.

Kolesnikova told DW that "more than a year" had already been lost in the struggle to remove Lukashenko. But she is certain his departure is "merely a matter of time, that is the price Belarusians will pay." She wrote that everyone — including Lukashenko and his allies — is losing out the longer he remains in power.

"Nothing lasts forever, and there are forces [within the government] open to constructive steps and dialogue," she told DW. "The lives of Belarusians, our shared future, our shared home — those are our core values; and they compel us to seek a way out of this crisis."