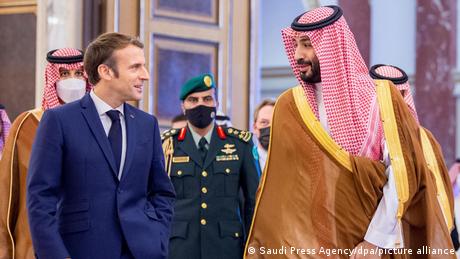 French President Emmanuel Macron used his visit to Saudi Arabia to help smooth a diplomatic row between Riyadh and Beirut over the war in Yemen.

Macron appeared upbeat about discussions, and said on Twitter: "With Saudi Arabia, we have made commitments for Lebanon: to work together, to support reforms, to enable the country to emerge from the crisis and to preserve its sovereignty."

Why were relations strained?

A few weeks ago Lebanon's Information Minister George Kordahi said in televised comments that the war in Yemen was futile and amounted to an act of aggression by the Saudi-led coalition.

The remarks sparked a diplomatic crisis. Saudi Arabia recalled its ambassador and banned all imports from Lebanon, which is in the midst of an economic meltdown.

On Friday, Kordahi announced that he intended to step down.

Riyadh has also been frustrated over Lebanon's Hezbollah militia , which is backed by Iran and plays and important role in Lebanese politics. Several Western governments have designated the group as a terrorist organization.

The French president said that both he and the Crown Prince sent "a clear message Saudi Arabia and France want to be fully committed."

Speaking to reporters shortly before leaving the oil-rich kingdom, Macron said: "We want to commit ourselves to supporting the Lebanese people and therefore do everything possible to ensure that trade and economic reopening can take place."

Macron did not comment on whether whether punitive measures against Lebanon would be lifted.

The two leaders also urged the Lebanese government to "work in a normal way" and to "carry out useful reforms."

Macron became the first Western head of state to visit Mohammed bin Salman since the murder of Saudi journalist Jamal Khashoggi in 2018.

Khashoggi was a prominent US-based columnist and critic of Riyadh. He entered the Saudi consulate in Istanbul on October 2, and was never seen again.

The journalist was forcibly restrained, drugged and dismembered inside the consulate, while his wife waited for him outside. His remains have never been found.

In March the US published an intelligence report that said Saudi Crown Prince Mohammed bin Salman approved the murder and dismemberment of Khashoggi. Saudi Arabian officials denied responsibility, saying that the journalist was killed in a "rogue operation."