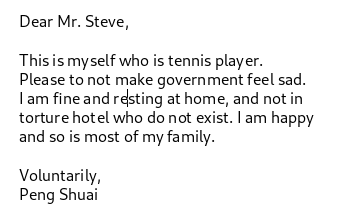 “My confirmed source told me that Peng Shuai today sent an email to WTA’s Steve Simon, expressed her shock for the WTA’s unfair decision to suspend all tournaments in China,” Shen wrote. “Peng asks Simon not to quote out of context and stop making any remarks exploiting her privacy.”

Shen posted the tweet in response to the WTA’s announcement on Thursday (Nov. 2), in which WTA Chair Steve Simon expressed his concern about Peng’s freedom. “In good conscience, I don’t see how I can ask our athletes to compete there when Peng Shuai is not allowed to communicate freely and has seemingly been pressured to contradict her allegation of sexual assault,” Simon wrote.

Commentators on Twitter questioned the legitimacy of Shen’s “confirmed source.” User "Hong Kong Will" replied, “Who's the source? Why aren't you naming it? If everything is fine, why is her name not searchable on the Chinese intranet? Why is state media the only one talking?”

CCTV Global Edition, a Twitter account that parodies Chinese state media China Central Television, mocked Shen’s claim by posting an image of a typed letter that reads, “Dear Mr. Steve, This is myself who is tennis player. Please to not make government feel sad. I am fine and resting at home, and not in torture hotel who do not exist. I am happy and so is most of my family. Voluntarily, Peng Shuai.”

The image shows a cursor in the middle of the text, a reference to the first email that Chinese media published with claims that Peng had messaged Simon to assure him of her safety. Unconvinced netizens had pointed out the copy of a sent email would not show a blinking cursor.

Another user named Han Yang (楊涵) responded to Shen’s claim that Peng asked Simon to respect her privacy. “If she wanted privacy, she wouldn't have to post her allegations on Weibo.”

Prior to the tweet about Peng’s protest, Shen posted “a key reminder” that the WTA had suspended all tournaments in China due to COVID19 restrictions in July 2021. “So WTA suspends all the tournaments they don’t have?” Shen asked.

Commentators were quick to point out that the WTA’s announcement referred to events in 2021 and was not related to the organization’s new decision to suspend its 2022 tournaments in China over the Peng issue. They challenged Shen to post about the topic on Chinese social media, where anything related to Peng remains strictly censored.