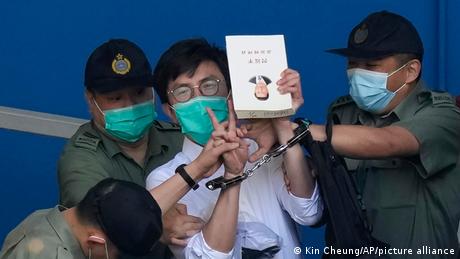 Hong Kong authorities are pursuing new laws to tighten the city-state's grip on public discourse critical of its Beijing-aligned government.

Residents are resorting to self-censorship and many feel that their city's progressive identity may have been permanently lost.

Speaking at the 2021 China Internet Media Forum in Guangzhou in late November, Hong Kong's Chief Executive Carrie Lam stated that her government would be moving forward with plans to further crack down on online expression.

"With the rapid development of internet technology, inherent laws may not be able to effectively deal with various misconduct on the internet, such as malicious disclosure of other people's personal information, hateful and discriminatory remarks or 'fake news,'" she told the audience.

Lam announced the possibility of anti-"fake news" legislation in May, and the government recently began a legal study into the issue.

The government is also busy drafting a cybersecurity law to protect against cyber-attacks. The law would also define internet providers as crucial infrastructure, making it possible for the government to exert greater control over online content.

The law also criminalized any speech – written or spoken – calling for Hong Kong's secession from China, and has since been used to shut down media outlets, prosecute pro-democracy activists and tighten internet regulations.

Michael Caster, Asia digital program manager at Article 19, an international organization that advocates for free expression, thinks that the security law and the proposed new legislation are part of a long-term strategy by the authorities in Beijing to further exert their authority over Hong Kong and test the limits of how tightly they can strangle civil society.

"We don't know what's in [all the laws], but if we look across the region at similar laws, these are disastrous for free expression," he told DW.

More recently, according to Caster, the national security law has been used to exert greater control over universities, museums and even filmmakers.

"It's really been an across-the-board effort to remove anything from the public domain that is part of a narrative outside of the accepted political reality that is being crafted by Beijing," he said. "I think it's definitely a sign that there are darker days ahead."

For John, a 33-year-old resident of Hong Kong, he is already living in these "dark days." When describing how the situation in the city has changed in the 18 months since the law was passed, he used the words "depressing" and "hopeless."

He cited the continuing prosecution of activists and the lack of transparency in the judicial process as reasons people have lost faith in the existing system.

"While there are still critical discussions online or in public spaces, most of these conversations have become very coded, meaning people use very subtle metaphors to refer to things that they dislike or disagree with," said John, who asked that only his first name be used due to fears of retribution.

Caster believes that one of the reasons people like John are scared to speak out or even talk politics in Hong Kong is that under the national security law, it remains unclear what kind of speech, actions or expression could lead to arrest and possible life imprisonment.

"That's the problem with the law itself," said Caster. "It's vague and broad and can effectively mean anything that the state wants it to mean."

In a report published in October documenting the impact of the law on media and internet freedom in Hong Kong, Freedom House stated that the law has "rapidly transformed Hong Kong toward an authoritarian system, with serious implications for the future rights enjoyed by Hong Kong people."

The report also stressed that while there has been an erosion of freedoms in Hong Kong, the territory still enjoys more freedom than any mainland city, with some independent media outlets and an open internet where few sites are blocked.

Unlike in mainland China, stated the report, "Facebook, Twitter and other international websites not only continue to be accessible in Hong Kong, they are still some of the dominant platforms used by Hong Kongers."

John has witnessed firsthand how these laws have altered the character of the city, as self-censorship on encrypted messaging apps like WhatsApp or in public spaces becomes the norm.

For many residents, Hong Kong's past embrace of critical speech in the form of art, films, novels, academic discourse and political dialogue were defining elements of this international metropolis and its 7.5 million people.

"Many people now believe Hong Kong is already on the way to becoming just another Chinese city, and the unique identity that once set Hong Kong apart from the rest of China has now been eroded," he added.

Rebecca is another resident who laments her city's transformation. She is in her 20s and considers herself part of the pro-democracy community.

These days, when she walks the streets of her city, she says she feels saddened by how similar and sanitary everything looks, and how the streets are increasingly covered with government advertisements calling Hong Kong "Asia's world city."

"It almost seems like a way for the government to convince us that everything in Hong Kong is still the same, and that we are still Asia's 'world city,'" Rebecca, who also asked that only her first name be used, told DW.

"The reason why it's depressing in Hong Kong is because everyone knows everything has changed," she added.

Despite the danger, Rebecca insists that critical discourse is still happening, but has taken up new forms that are less open or obvious. For example, she recently attended a theater production about zombies attacking Hong Kong.

William Yang contributed to this report.