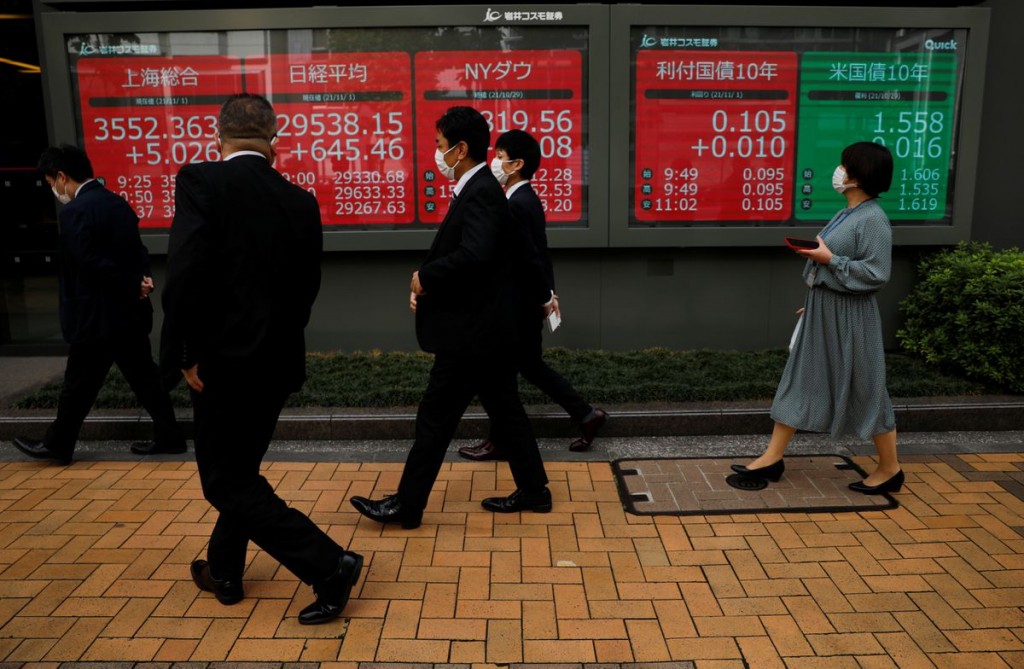 Stocks fell on Friday after Chinese ride-hailing giant Didi said it would delist in New York, renewing concern about U.S.-China tensions and tech regulation, while oil headed for a sixth consecutive weekly drop on Omicron and rate hike worries.

The risk-sensitive Australian dollar fell 0.3% and at just below 71 cents is close to a one-year low.

Didi (DIDI.N) ran afoul of Chinese regulators by pushing ahead with its $4.4 billion U.S. IPO in July and said on Weibo it was looking to move its listing to Hong Kong.

"Delistings starting to happen gives some jitters over the uncertainty as to how this impacts on the broader U.S.-China picture," said Bank of Singapore analyst Moh Siong Sim.

The news about Didi comes a day after Singapore-based ride-hailing and delivery firm Grab (GRAB.O) slid more than 20% on its Nasdaq debut. The listing is the biggest on Wall Street by a Southeast Asian firm.

More broadly markets have lurched around on little hard news about Omicron this week, driving the CBOE volatility index (.VIX) toward its biggest one-week leap since the pandemic chaos of February 2020. Short-term yields have also jumped as investors bet on higher rates, even with the Omicron uncertainty.

Traders will need to wait at least another week or so for an early read on the variant's virulence or vaccine resistance. U.S. labour data due later on Friday is also in focus as a guide to rates.

Benchmark brent crude futures finished higher overnight at $69.67 a barrel, but have dropped more than 3% this week and are down more than 18% from October's three-year high.

So far, in the absence of Omicron details some governments have scrambled to shut borders anyway. But other policymakers - most notably the Federal Reserve - are cautiously proceeding apace with plans to move away from crisis-mode responses.

"The Fed is not ignoring the threat from Omicron, but are choosing not to let it delay policy responses that suggest a more business as usual outlook," said Commonwealth Bank of Australia strategist Tobin Gorey.

"OPEC+ has done a similar thing," he added. "Neither has iced their planned policy changes...and both are perhaps examples that suggest lockdown responses to epidemic surges are becoming less likely."

The bond market's response to Powell's hawkish shift has been to jack up short term rates and push down long ones, reckoning that sooner hikes will end up curbing future inflation and growth, and sharply flattening the U.S. yield curve.

"It's inflation, not growth, which is making the Fed accelerate tightening plans," said Kit Juckes, a strategist at Societe Generale in London.

"For the first time in ages, the risk to this U.S. economic cycle is that it comes to an end sooner than consensus forecasts expect," he said, forecasting that the U.S. dollar's upward momentum could slow into a peak around the middle of next year.

Investors sold riskier currencies on Friday. The risk-sensitive Australian and New Zealand dollars lost about 0.3% each. The euro was steady at $1.1298 and the yen firm at 113.08 per dollar.