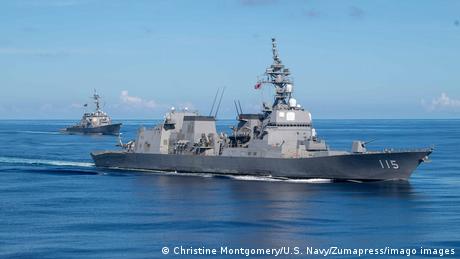 The United States and the European Union released a joint statement on Thursday, detailing shared concerns over China's actions at sea.

The briefing said the US and EU had strong concerns about what they considered China's "problematic and unilateral actions" in the South China Sea, East China Sea and Taiwan Strait.

It said China's activities "undermined peace and security in the region," and stressed the need to manage "competition and systemic rivalry" with Beijing.

The statement followed talks in Washington between US Deputy Secretary of State Wendy Sherman and the Secretary General of the European External Action Service (EEAS), Stefano Sannino.

The briefing also discussed the repression of China's Uyghur and Tibetan ethnic minorities, and the erosion of Hong Kong's autonomy and democratic political system.

What is the EU position on the South China Sea?

Herve Blejean, director general of the EU military staff, said there could be greater EU-US coordination to "express our strong desire to defend international law at sea against de facto policies that we've seen in the South China Sea."

Blejean said that France was a Pacific power, and other EU member states such as Germany, the Netherlands and Denmark showed interest in the region. France administers a number of territories in the Pacific, including New Caledonia, which rejected independence in a referendum last year, French Polynesia and Wallis and Futuna.

Blejean said the EU could consider establishing a "Maritime Area of Interest" in the South China Sea, similar to a pilot project aimed at better coordinating the EU presence in the Gulf of Guinea, part of the Atlantic Ocean. Another project in the northern Indian Ocean is also being looked at.

What are the concerns about?

The talks in Washington come amid rising tensions between the US and China over Taiwan. Chinese President Xi Jinping last month warned of a return to "Cold War tensions", while US President Joe Biden spoke of the US commitment to defend Taiwan.

Beijing has sought to boost its presence in the disputed South China Sea, where several countries, including China, the Philippines, Vietnam and Indonesia, have overlapping territorial claims.

In one recent confrontation, the Chinese coastguard wasinvolved in an incident that blocked two Philippine boats.

In 2016, the Permanent Court of Arbitration in The Hague ruled that most of China's claims in the South China Sea were illegal.