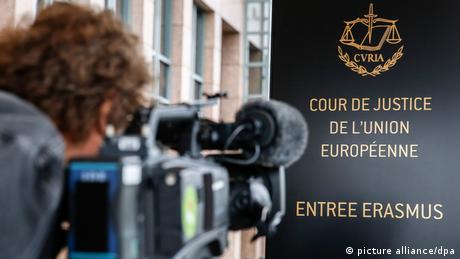 The European Court of Justice's advocate general Manuel Campos Sanchez-Bordona said Thursday that the top court should dismiss a challenge to the EU's new "rule-of-law" mechanism brought by Poland and Hungary.

While the opinion is non-binding, the Luxembourg-based court tends to follow the opinion of the top lawyer. A ruling in support of the mechanism would affirm EU efforts to curb the erosion of democratic practice among member states.

Sebastian Kaleta, a deputy justice minister in Poland, was critical, writing on Twitter: "It was a naivety to trust EU institutions would be capable of self-restraint. This is an assault on the rule of law."

What is the 'rule-of-law' mechanism?

The "rule-of-law" mechanism was created by the EU in response to critics who called on it to withhold funds from member states that refuse certain obligations, for example by corroding the separation of powers. It was only agreed on last December after lengthy internal discussions.

Pressure on Warsaw and Budapest over rights

Sanchez-Bordona wrote in his opinion that the safeguard "was adopted on an appropriate legal basis" and resembles other financial and legal remedies "that exist in various areas of EU law."

Rights activists say the far-right governments in Warsaw and Budapest have influenced their nation's judiciaries, impinged on press freedom and other minority rights, such as those of the LGBTQ+ community.

The EU has yet to make use of the mechanism and leaders said it would not do so until the court reviewed the matter.