In a rare move, both President Tsai Ing-wen (蔡英文) and Vice President Lai Ching-te (賴清德) delivered opening remarks at the two-day event, which was co-organized by the Legislative Yuan and Ministry of Foreign Affairs. Tsai said Taiwan is on the frontlines of an international struggle between democracy and authoritarianism, expressing hope that the forum would be a platform to strengthen exchanges between democracies.

Thursday's speakers at the event, themed "Open Parliament in a Post-COVID Context: Global Examples of Resilience and Planning for 2022 and Beyond," discussed the topics of "parliamentary transparency, trust, and inclusiveness"; "COVID response and parliamentary openness"; "recommendations for parliamentary actions on disinformation"; and "frontiers of democracy."

Participants from the U.S., U.K., Sri Lanka, Japan, France, Germany, Australia, and the Czech Republic are joining via videoconference, while two Belizean officials and 10 pro-Taiwan legislators from the Baltic countries are taking part in person.

Valerie Woods, speaker of the House of Representatives in Taiwan's ally Belize, was among the foreign legislators physically present. She said Taiwan is a model of "resilience against intimidation from a superpower," referring to China.

She added that Taiwan is an "important partner of Latin American and the Caribbean" and praised its action plan for an open parliament.

Maria Baron, global executive director of Directorio Legislativo, an Argentina-based organization that promotes government transparency, said she looked forward to learning from Taiwan's experience with open government and open parliament. "the idea of spearheading this (open parliament) "action plan" is interesting since some OGP (Open Government Partnership) members have not gone down that path yet."

The OGP is an international initiative in which member countries, currently numbering 78, and local governments and civil society groups, collaborate to draft "action plans" or tangible steps toward government transparency and citizen empowerment while combating corruption and using technology to enhance the effectiveness of government.

The Legislative Yuan and the Tsai Ing-wen administration are undertaking new policies to better include Taiwanese citizens in the process of government, CNA cited the president as saying Wednesday (Dec. 1) while meeting with foreign dignitaries arriving for the forum. She said she hopes this will help pave the way for the country's eventual participation in the OGP. 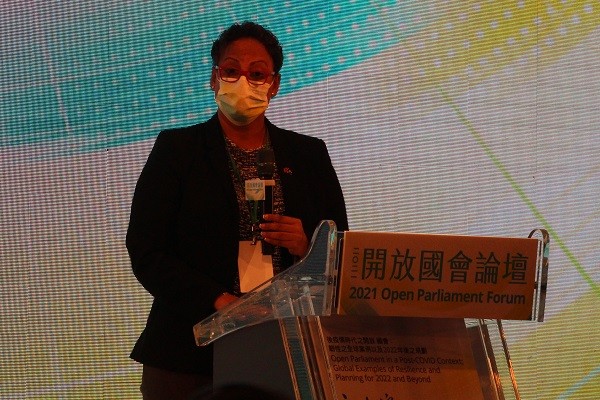