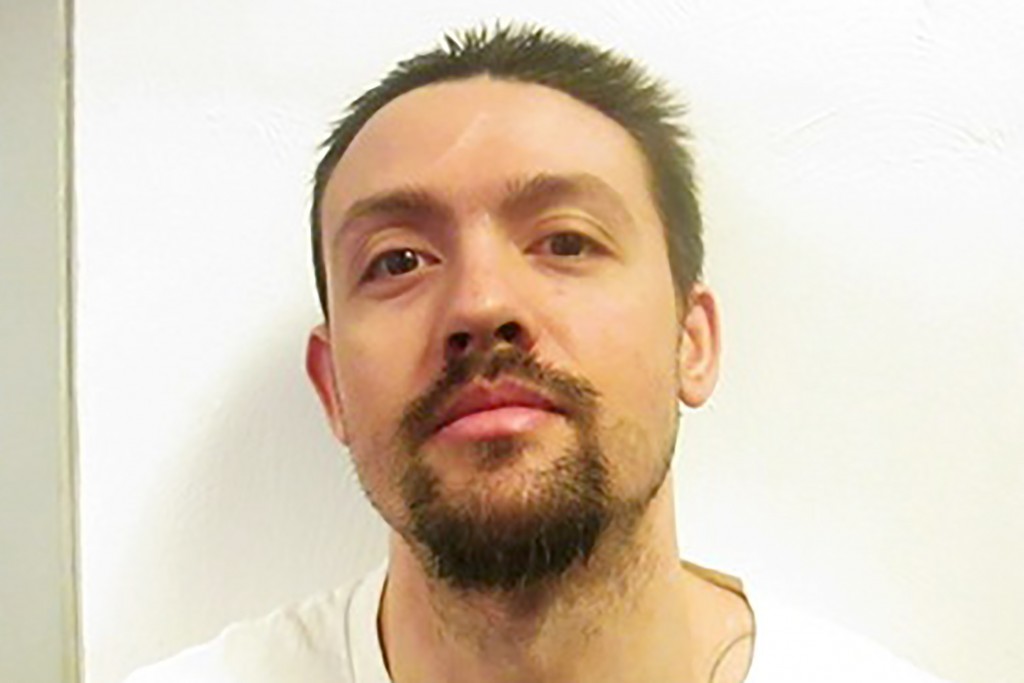 OKLAHOMA CITY (AP) — The Oklahoma Pardon and Parole Board voted 4-1 on Wednesday to reject clemency for a man convicted and sentenced to die for his role in a quadruple slaying in Oklahoma City in 2005.

The board's denial of a clemency recommendation for 35-year-old Gilbert Postelle paves the way for him to receive a lethal injection on Feb. 17 unless a court intervenes.

Postelle did not deny his involvement in the Memorial Day 2005 shooting deaths of James Alderson, Terry Smith, Donnie Swindle and Amy Wright at a home in southeast Oklahoma City. Prosecutors say Postelle, his brother David Postelle, father Brad Postelle and another man carried out the killings in a “blitz attack" motivated by their belief that Swindle was responsible for a motorcycle accident that left Brad Postelle seriously injured.

Gilbert Postelle received two death sentences for the killings of Wright and Alderson after evidence showed he pursued the two as they were trying to flee and shot them from behind with a rifle.

“In her final moments, Amy Wright was screaming and clawing the ground to escape from Gilbert Postelle," Assistant Attorney General Julie Pittman told the board. “He heard her screams, saw her desperate attempt to escape from him. Rather than showing Amy mercy, he shot her in the back three times."

But Postelle's attorney, Robert Nance, argued that Postelle, then 19, suffered from years of methamphetamine abuse that began around age 12 and that he was strongly influenced by his father, who suffered mental injuries in the motorcycle crash that ultimately prompted the slayings.

Nance said Postelle has changed in prison and that the staff at the Oklahoma State Penitentiary trust him enough to be a unit orderly who helps deliver meals and mail, mop the floors and keep the unit clean.

“He's a different man than he was," Nance said. “I think he needs a certain amount of forgiveness because he grew up in an environment that was almost exclusively negative."

Gilbert Postelle, who testified via a video link from prison, said he had been using meth for days before the killings and remembered little about the crimes.

“I do understand that I'm guilty and I accept that," he said. “There's nothing more that I know to say to you all than I am truly sorry for what I've done to all these families."

The board also heard from Gilbert Postelle's daughter and wife, who both urged the board to recommend his life be spared.

“My dad is my inspiration. He keeps me going. He calls me his beautiful daughter and says he's proud of me," Kaylei Johnson told the board. “I don't want to lose my dad."

Several members of the victims' families urged them to reject clemency.

“We never got to see him after he was murdered because his body was riddled and torn with bullets," said Donnie Swindle’s mother, Mary Jo Swindle. “You may be a changed man, but my son and three others are still dead."

Ultimately, board member Adam Luck, who expressed misgivings about the state's ability to humanely execute people after John Grant convulsed on the gurney and vomited during his execution last month, was the sole vote in favor of a clemency recommendation.

Gov. Kevin Stitt cannot commute a death sentence in Oklahoma without a recommendation from the five-member panel. The board voted 3-2 last month to recommend clemency for Bigler Stouffer II, who was sentenced to death for the 1985 fatal shooting of school teacher Linda Reaves, but Stitt has yet to act on the recommendation.

On Wednesday, supporters of Stouffer and the anti-death penalty organization Death Penalty Action delivered a petition with an estimated 10,000 signatures asking Stitt to grant Stouffer clemency.

Stouffer’s supporters asked to meet with Stitt but were told he was unavailable, said Death Penalty Action's director, Abraham Bonowitz.

“It’d be nice if he were to make a (clemency) decision and not string it out until the last minute,” Bonowitz said.