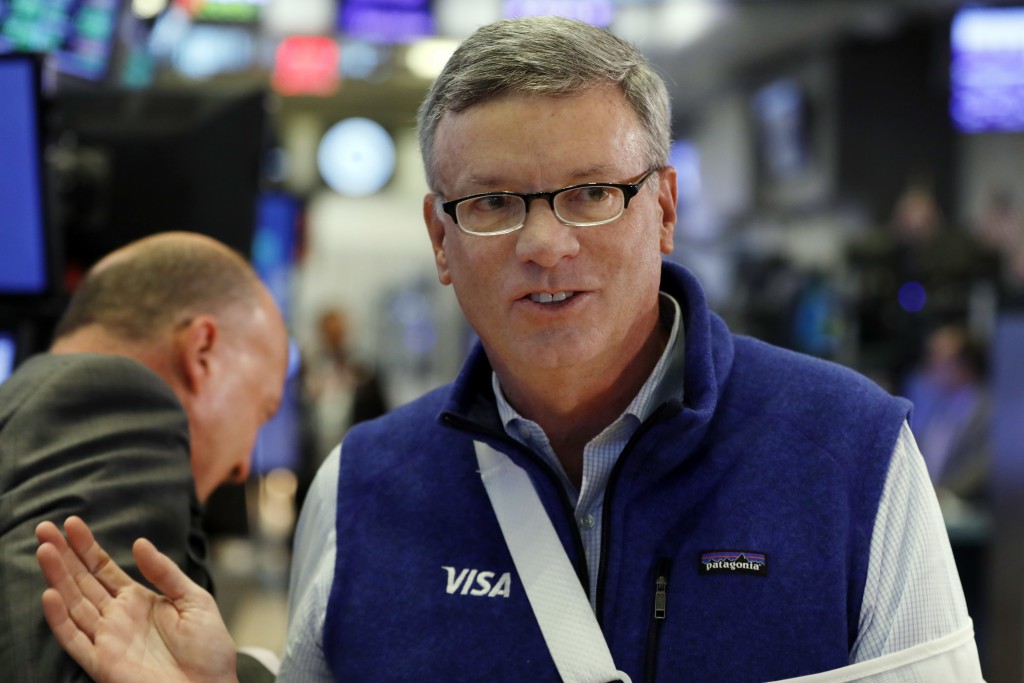 SAN FRANCISCO (AP) — Al Kelly believes there has been a permanent shift in how consumers worldwide pay for goods and services. His 91-year-old parents are a prime example.

The CEO of payments processing giant Visa recently visited his mother just after she'd finished buying her groceries online — something she'd never done prior to COVID-19.

“She said to me ‘I cannot believe I wasn’t doing this before the pandemic,’” Kelly said in an interview with The Associated Press.

Kelly is more than five years into his tenure as the head of one of the world’s largest payments companies and arguably, one of the world’s best-known brands. Since he took over, the company’s stock has tripled in value as more of us pay with Visa’s credit and debit cards — a trend bolstered by the pandemic, as once cash-only establishments started accepting plastic and shoppers did more transactions online.

But while the shift to online shopping is helping Visa’s bottom line, the company is facing new forms of competition, particularly from Silicon Valley, who have debuted alternative forms of payment that go around the traditional Visa and Mastercard networks.

The company has also gotten pushback from Washington, where skeptical policymakers have questioned Visa's dominance of the payments industry. Visa abandoned its intent to purchase Plaid, a company that helps merchants and banks better accept online payments, after the Justice Department sued to stop the merger, citing antitrust concerns.

Visa does not issue credit or debit cards. It’s a payment processor, providing the network between the bank that issues that card and the merchant accepting that card as payment. In exchange, Visa charges a fee from every transaction that runs on its network, which translates into billions of dollars in profit and revenue each year.

During the pandemic, more consumers became comfortable purchasing routine items online or with their smart phones to avoid risky in-person interactions. This was particularly seen in parts of the economy that have traditionally been cash-heavy such as grocery stores, coffee shops and bars.

Kelly pointed to the growth in debit card usage in the pandemic as an example. Debit cards are typically thought of as equivalent to cash in the payments industry — they can be used to buy items, but also to withdraw cash at an ATM. In the past year, debit card purchasing volumes on Visa’s network rose 23% from a year ago, while cash withdrawals were only up 4%.

“People are choosing not to get cash to shop but actually using their debit cards to shop now,” he said.

Any shift away from cash and digital payments will ultimately be good for Visa’s bottom line. Even a shift of 1% or 2% of consumers’ payments away from cash and onto credit and debit cards could result in tens of billions of dollars of additional transactions crossing over Visa’s network.

To talk about the size and scope of Visa often requires dealing in numbers that are usually reserved for describing the federal government. Visa processed $10.4 trillion in payments on its network in the fiscal year ended in September. That’s up roughly 16% from fiscal 2019, before the pandemic disrupted global trade and travel. The only payment processor larger than Visa is China’s UnionPay, which benefits as a payment monopoly bolstered by the large Chinese population and the world’s second-largest economy.

For decades, Visa and its primary competitor Mastercard have held the dominant market position in how people pay for goods and services, with American Express a distant third. But that duopoly is being challenged by the likes of Venmo, Affirm, PayPal and other fintech companies now providing payments services to both customers and merchants. Apple operates its own payment system. And cryptocurrencies such as bitcoin, etherium and others still hold the promise of being alternative forms of payment outside the traditional banking system.

In short, how one pays for goods and services is not as simple as “cash or credit” — with the credit choices being Visa, Mastercard or American Express — as it was five years ago.

Kelly sees Visa’s ubiquity as one of its strongest selling points as more competition arises. True to its old advertising slogan, “it’s everywhere you want to be,” Visa has had years to build out the infrastructure and merchant network to accept its cards.

“There will always be new forms to pay, but they will still need an infrastructure that creates utility and security that they need,” he said.

But the increased competitive space for payments has made some merchants start questioning whether Visa’s armor may be weakened. Merchants have long been upset with the fees they pay to the processors to accept credit cards — which typically range from 1% to 3%. It’s often a retailer’s largest expense after payroll and the cost of buying goods. Merchants have previously used their collective power in Washington to cap fees on certain types of transactions, particularly debit cards.

Amazon has said it will stop accepting Visa credit cards issued in the United Kingdom early next year, saying Visa’s fees are too high compared to Mastercard and other payment processors. Visa has pushed back. Visa and Amazon have a co-branded credit card together that is up for renewal soon, and Amazon may be looking for leverage.

“Consumers should be able to use their Visa cards wherever they choose,” Kelly said. ”When a merchant restricts choice, no one wins. In this case, the merchant is not respecting the choice of the consumer.”

Industry analysts and investors have taken the Amazon spat as a sign that Visa may face increased competition in coming years or may face future conflicts with big merchants upset with the fees they are paying to Visa and Mastercard to use their respective payment networks. Visa shares have fallen more than 7% this month alone.

This story has been corrected to say that Amazon has said it will stop accepting Visa credit cards issued in the United Kingdom as of early next year. An earlier version incorrectly reported Amazon had already stopped accepting the cards.