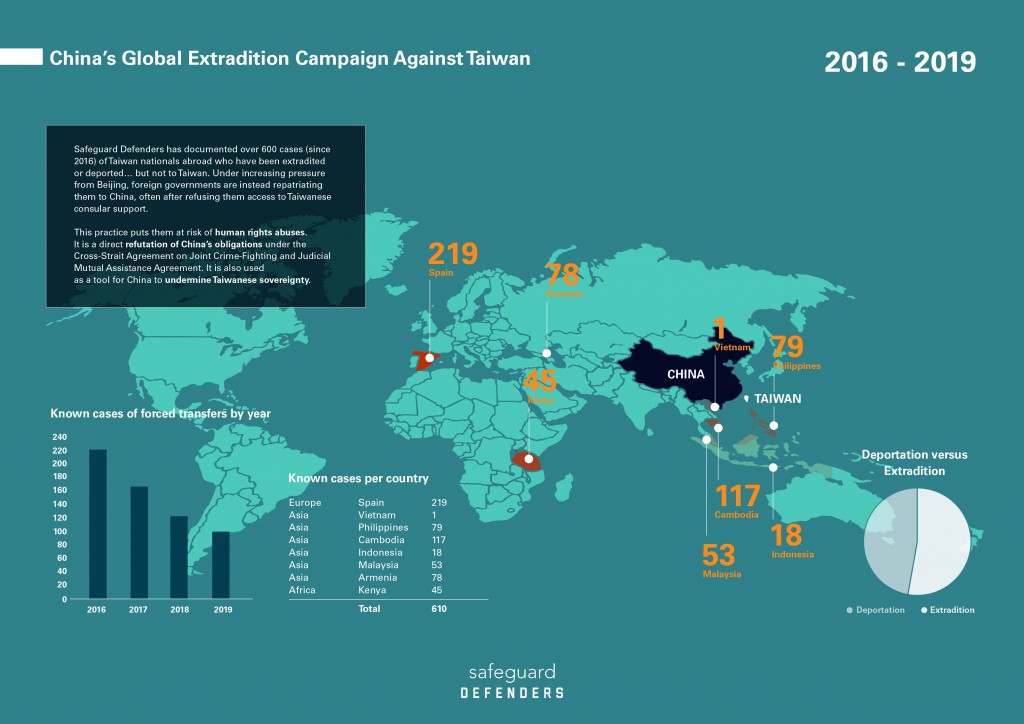 TAIPEI (Taiwan News) — A report released by the international human rights organization Safeguard Defenders has alleged that China is "hunting" Taiwanese all over the world, with over 600 cases of Taiwan nationals being extradited or forcibly deported to China over the course of three years.

In a report titled "China's Hunt for Taiwanese Overseas" released Tuesday (Nov. 30), the NGO stated that this persecution of Taiwanese amounts to an "assault on Taiwan's sovereignty." It warned that this is part of a "larger global campaign" in which China under Chairman Xi Jinping's leadership (習近平) exploits extradition treaties, mutual law enforcement agreements, and other multilateral institutions to serve the political goals of the Chinese Communist Party.

Safeguard Defenders stated that it has recorded more than 600 cases of Taiwanese being extradited or forcibly deported from Asian, African, and European countries between 2016 and 2019. Rather than returning them to their home country, it pointed out that under pressure from Beijing, foreign governments are forcibly sending Taiwanese to China, where they have "no roots and no families."

According to the report, the sending country usually denies detainees the assistance of or contact with the Taiwan representative office before transporting them to China. Once in the communist country, Taiwanese are denied contact with Taiwanese government officials and family members.

The report pointed out that these forced deportations place Taiwanese citizens at risk of human rights violations and that Beijing uses them as a "tool to undermine Taiwan's sovereignty." These actions are also in direct violation of the Cross-Strait Agreement on Joint Crime-Fighting and Judicial Mutual Assistance Agreement.

The organization described the extraditions to China as a "violation of (Taiwanese citizens') human right to a fair trial, and their right to be free from torture." It then called on the international community to take immediate action to put an end to this campaign.

The country that sent the largest number of Taiwanese to China over that three-year period was Spain, which extradited 219 for telecom fraud.

Kenya was the sole African country that sent Taiwanese to China, with 45 deported and extradited for telecom fraud and fraud.