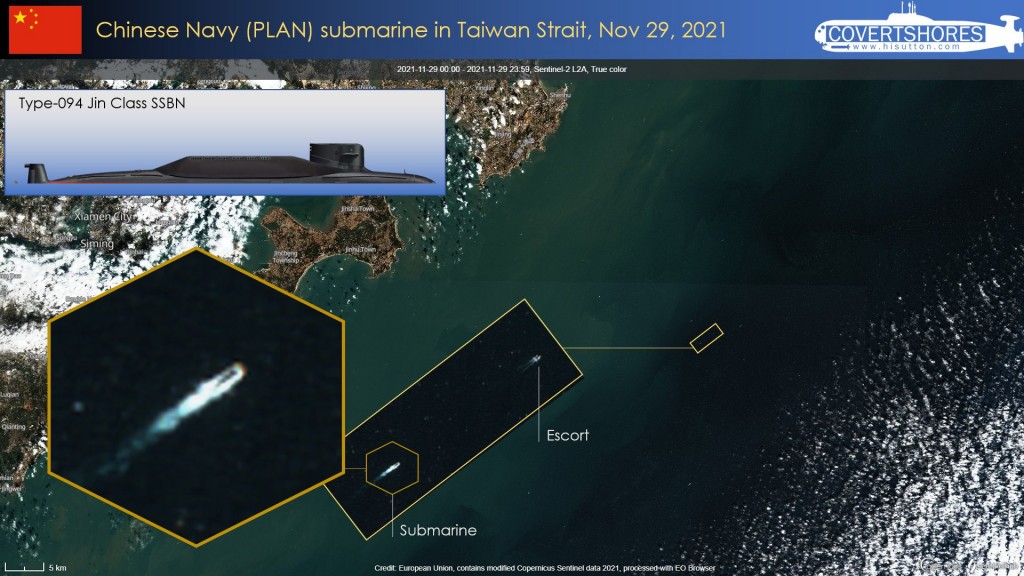 Monday evening, USNI columnist and military expert H I Sutton posted an image taken by the European Space Agency's Sentinel-2 satellite at around 10 a.m. Taipei Time showing what he believes to be a Chinese ballistic missile submarine (SSBN) prowling the Taiwan Strait while escorted by a surface ship. Based on the wake pattern, rounded bow, and length, Sutton said the sub is likely a Type-094 Jin Class SSBN.

Sutton suggested that the attack sub was traveling north from Yulin Naval Base, which is on the southern coast of the Chinese island of Hainan. He said that the vessel was likely on a routine mission, as China's nuclear-powered submarines frequently head north to the Bohai Shipyard for "repairs and overhaul."

Beijing-based think tank the South China Sea Strategic Situation Probing Initiative (SCSPI) on Monday afternoon announced that a U.S. Navy P-8A maritime patrol aircraft with the aircraft registration number AE6832 had flown south to north over the Taiwan Strait that day. The plane took off from Misawa Air Base in Japan and flew around the eastern and southern edges of Taiwan's air defense identification zone before entering the Taiwan Strait from the south.

On his Facebook page Monday evening, Lu Li-shih (呂禮詩), a former captain of Taiwan Navy corvette the Xinjiang, wrote that the P-8A had probably flown over the Taiwan Strait to monitor the movements of the Chinese submarine. However, he emphasized that he did not think the submarine was simply returning to the Bohai Shipyard for maintenance.

"Strategic nuclear submarines have been deployed in Sanya, Hainan, for so many years. Why would (the base) be incapable of providing maintenance? If it needed to go north for repairs, why did it need to float through waters with the busiest coastal traffic in China?"

Lu then speculated that the ship may have collided with the USS Connecticut (SSN-22), which according to official US Navy reports struck a "seamount" while maneuvering in the South China Sea on Oct. 2 of this year. He then implied that the incident could have been similar to the 2000 Kursk submarine disaster, which conspiracy theories allege was precipitated by a collision with a NATO submarine.